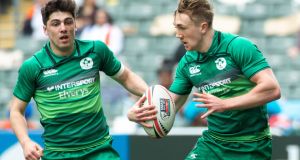 Ireland are through to the semi-finals of the Hong Kong Sevens Repechage tournament after a comprehensive 38-5 win over Zimbabwe in the last eight.

Anthony Eddy’s side will face Japan in the semis, as they bid to secure a place on the elite World Sevens circuit in 2019.

Ireland’s place in the last four was virtually secured by half-time of their Zimbabwe clash, as they went into the break leading 26-0.

Two victories will see unbeaten Ireland book their place in the World Rugby Sevens series for next year. They play Japan at 5.54am on Sunday (Irish time).

Ahead of the crunch clash with Japan, Eddy said: “They’re a good side. They’ve got World Series experience as well so we’ll have to be on our game tomorrow morning to compete against them.”

Earlier in the day Ireland topped their pool after a 36-0 thrashing of Uruguay. Tries from Fitzpatrick, Kennedy, Keenan, Daly, Jimmy O’Brien and Harry McNulty set up victory over the outgunned south Americans.