David Humphreys: Georgia simply can't be dropped in at the deep end 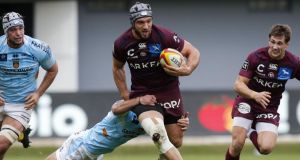 International rugby in 2020 can be summed up by a stark reality: the 12th ranked nation in the world is not a suitable opponent for the fifth-ranked island.

To call Georgia versus Ireland (seconds) a mismatch would be as generous as it is naive. We are not editorialising. This comes from a primary source.

“For Georgia, if we spent too much time looking at the opposition we would be beaten before we started the game,” said David Humphreys, in his temporary capacity as a World Rugby-appointed high performance consultant to the former Soviet republic.

Milton Haig, the since departed Kiwi coach of Georgia, shrugged his shoulders after the Grand Slam version of Wales had them spinning at half-time (29-0) and positively nauseous (43-14) after last year’s World Cup opener in Toyota City.

“You can’t produce miracles if you are not used to playing at this speed,” Haig told an uninterested audience. “I have voiced my opinion to [World Rugby] a number of times, both in person and through the media. Will we get change? I’m not sure.”

As the winter freeze finally grips Dublin city, we leave these words at Humphreys feet.

“Having seen it first hand over the last four weeks, I can absolutely understand what Milton is saying,” replied the 49-year-old former Ulster and Ireland outhalf.

“The massive challenge for Georgia is that the gap between them and the other teams they play in the European rugby championship is the same as the gap between everyone Georgia has played in the Autumn Nations Cup.

“So they are stuck in limbo: too good for who they play regularly and not quite good enough to play tier one nations on a regular basis. I believe there has to be a halfway house where they are playing tier one nations that are closer to them in the rankings than New Zealand, South Africa, England, Ireland...”

The positive perspective cannot mask a glaring negative: “Nobody has got the answer to this just yet but Georgia’s involvement in this competition has been hugely beneficial for them in terms of exposure of the players they have but, equally, to prove that there is still a huge gap between a tier one nation and a tier two nation that has huge aspirations to be more competitive and get to that level.”

The 72-times capped international outhalf – who first danced onto our screens when posting all Oxford University’s points in a 21-19 defeat to Cambridge at Twickenham’s annual varsity match in 1995 – is the third Irishman to no longer be working as a director of rugby in the English Premiership.

Geordan Murphy recently parted ways with Leicester Tigers after 23 years of service while Mark McCall’s Saracens are spending some time in the lower league due to financial doping.

Not to worry, Conor O’Shea, Terenure’s very own Ned Broy, is running the RFU.

World Rugby’s consultancy role was the first offer Humphreys accepted to get some income flowing again; a thankless stint overseeing Georgia’s impersonation of untrained paratroopers landing into the Autumn Nations Cup after Japan decided that Europe is too infected to visit.

Fiji came, saw and were clustered out of this inaugural tournament that may or may not have a second coming.

Georgia have been holed up in south west London, staying virus-free and barely making up the numbers. England mauled them 40-0 before Wales beat them 18-0.

On Friday they flew into Dublin. On Sunday Humphreys would be content returning to London with some dignity intact for everyone involved.

As many as the Irish defence can spare. Zero is a very real prospect.

Georgia have always been “the rest”. The year 2007 almost provided an exception when a refereeing decision denied them a try that would have humiliated Eddie O’Sullivan’s Ireland while also shaking the foundations of rugby’s old boys club. Japan and Argentina then beat them to it.

Georgia are following Argentina’s pathway by forming a “strong relationship” with the South African rugby union that potentially allows their underage national sides to play on the high veldt before a “Jaguares” type side is eventually pieced together.

“The problem is all the best Georgia forwards end up at French clubs.”

Such exposure for a nation of props – as Haig described them – should be one of those good problems but it merely reveals another hole in their development.

A solution seems even more complex than for Fiji, Tonga and Samoa’s plight, although no less unfair as professional rugby hands over the reins of power to CVC Capital Partners (a hedge fund that cares not a jot about borderlines on an old world map).

“It’s what makes all the discussions around a global season so important. The reciprocal arrangement for Test matches between leading nations cannot be the solution.”

It can be if the power brokers decide to kill off any scope for international rugby to have an expansive, sustainable future.

Humphreys’ warning is unambiguous: Georgia cannot merely be dropped into playing England, Wales and Ireland. They need annual exposure to Italy, Japan and the Pacific Islanders, building up to at least one major Test match each year.

Ideally, the dots Humphreys is drawing will be joined up by people higher up the food chain (like Joe Schmidt). Try holding your breath on that one and your face won’t be long turning blue.

Also – sorry, more bad news – there was a generational turnover of Georgian players post Japan’9 with most of their gnarled props and locks walking away. Worst of all the great Mamuka Gorgodze retired.

Georgia has a new generation of players who are fantastic athletes

Due to the mass turnover of veterans, Georgia are no longer able to guarantee the one characteristic rugby expects of them: scrummaging.

They do boast a fantastic number eight, 24-year-old Beka Gorgadze, who plays for Bordeaux while 21-year-old outhalf Tedo Abzhandadze, who played under-20s for Terenure in 2017 before leading the Junior Lelos to victory over Calean Doris’s Ireland 20s in 2018, is an unpolished gem.

But Abzhandadze, Humphreys notes, is not going to improve sitting on the bench at Brive.

David Humphreys freely admits he is no coach; his role is to oversee, so coaches like fellow Ulster halfback Neil Doak can drill some competitiveness into a nation operating with both hands tied behind their back; adequate preparation and home advantage are the pillars of any sporting team attaining competency.

Like all the “emerging nations” that never emerge, governance is also a concern. On whether the alleged shooting by former Georgia rugby union board member Merab Beselia of former Sevens captain Ramaz Kharazishvili last September influenced his decision to take this role, Humphreys responded: “I completely ignored it.”

World Rugby informed The Irish Times that this did not warrant an investigation as the incident took place outside the Georgia union’s offices in Tbilisi, as opposed to inside the building, and because Beselia was no longer on the Georgia union’s board, they considered it a police matter.

“Georgia has a new generation of players who are fantastic athletes but one player is a teenager coming from division three rugby in Georgia to face the best players in the world,” Humphreys concluded. “How can you be judged on this?”

His consultancy ends soon but his post-Gloucester plans remain unknown, although life on the director of rugby circuit remains appealing.

“You do miss it. It has been a big part of my life for 12 years. It is what I know to do better than anything else.”