‘They’ve been in the country, they are members of their local communities, and we just get on with it from there’ 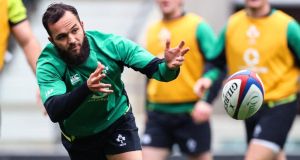 Jones referenced Ireland as the ‘United Nations’ on the grounds that eight of Andy Farrell’s 23-man squad for Saturday’s Autumn Nations Cup match at Twickenham hail from overseas.

Rob Herring, another player from South Africa, Australia-born Finlay Bealham and former England under-20 star Billy Burns, born in Bath, have been named among the replacements.

Murphy was adamant Ireland’s coaching staff have no reason to defend their selection and says the diversity does not cause division within the camp.

“Definitely not. We’ve a group of a players obviously who are all eligible to play for Ireland,” said Murphy.

“We select that squad early on in relation to who we feel is in the best place to play for Ireland over the next number of weeks.

“To tell you the truth, we think of all of our players as being Irish. They’ve been in the country, they are members of their local communities, and we just get on with it from there.

“When the guys come in and play for Ireland, they are in a situation where they are more than happy to do that and they take on the challenge as if they were anyone else.

“I can’t say how they actually feel but from a coaching point of view, they fit into the group really well and they’re taking us forward.

“There’s no ‘us and them’, it’s Ireland as a squad, including the management.”

World Rugby guidelines state players are eligible to represent another country if they have lived there for three consecutive years, or if they have a parent or grandparent born there.

With some quarters calling Ireland the ‘Irish Barbarians’, England coach Jones seized his opportunity for a playful quip at his pre-match press conference on Thursday.

“I heard someone calling them the United Nations, so I had a little chuckle,” said the Australian.

He added: “I can understand how Irish people would be upset about Irish-born players missing out, but they are the laws and regulations of international rugby. They are just sticking by the regulations.”

With Ireland seeking to end a dismal run of three heavy defeats to England, Murphy is convinced the foreign-born contingent are aware of the rivalry between the countries.

“People are always looking for little things but for us it’s all been about a Test match. All the ones that we play in, our preparations are very similar,” he said.

“There’s been nothing special this week in relation to trying to build up these guys.

Another area of Farrell’s selection which has attracted attention is the halfback pairing of Gibson-Park and Ross Byrne.

Gibson-Park has retained the scrumhalf role ahead of the vastly-experienced Conor Murray, while outhalf Byrne has been tasked with filling the sizeable boots of injured Leinster team-mate Johnny Sexton.

Murphy is optimistic Byrne will prove a capable understudy.

“I am very confident in Ross. Ross is getting a big opportunity. Obviously coming out of Johnny’s shadow – like he does for Leinster – is tough because people will be very focused on him,” said Murphy.

“But he’s led the week very well, he’s stepped up, his communication and his leadership has been really good.

“He’s going into a Test match that he knows is a massive opportunity for him personally but I know that Ross will put the team first and try and guide his team in the right direction.”