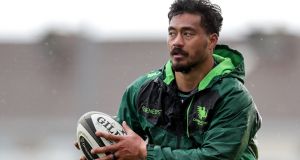 Connacht are grappling with two major blows ahead of the Ospreys’ visit to the Sportsground this weekend.

Centre Tom Farrell has been ruled out for at least six weeks with a knee injury, while Abraham Papali’i’s availability will depend on the results of Thursday’s hearing for the red card issued in Connacht’s win over Zebre in Parma at the weekend.

Connacht coach Andy Friend is fully backing his player who was sent off after a clash of heads with Zebre’s Tommaso Boni. It is the second red card the New Zealand-born former rugby league star has received this season, having been sent off when making his debut against Munster earlier in the season.

However Friend is hoping the red card will be rescinded when Connacht manager Tim Allnutt and solicitor Barry Gavin represent Papali’i via video conference at a disciplinary hearing.

The 27-years-old Aucklander, whose wife is currently in New Zealand, was “really down in the dumps” as a result.

I think he’s got an enormous future, and I don’t want to see that grilling for the bloke because he starts to become the bloke who always gets the red card, that is wrong

“You could forgive him for feeling a long way away from anybody on Sunday night. I had a good chat with him yesterday, and my wife has dropped off another bowl of spaghetti bolognese to put a smile on his dial.

“It’s not easy for him, but at the same time he is in this job knowing this job’s not easy, and there are big sacrifices. But it’s important for people out there to understand he’s a human being. He didn’t mean to do what he did, he’s a long way from home, he has a lot of things on his plate, and we are here to support him and work through the tackle stuff with him.

“I sent him this message yesterday, saying ‘I couldn’t be more supportive of you and what I know you can do’. I think he’s got an enormous future, and I don’t want to see that grilling for the bloke because he starts to become the bloke who always gets the red card, that is wrong.

“All of a sudden you’ve got Abraham Papali’i – played four games for Connacht and two red cards. That doesn’t look good for that young man and he’s trying to build a career over here in Europe and before you know it, he becomes known as ‘the red card bloke’.

“I just don’t think that’s fair and we want to make sure we get a fair hearing with that.”

Friend says the former rugby league player has been working on his tackle technique since arriving in Galway.

“We’re working really hard with him to drop that body height. He’s a big man anyway and those things take a while, but with this one, you could see he was just trying to come forward and grab him. The Zebre player is allowed to do what he chooses to, and step and all the rest of it, but he certainly wasn’t trying to hit him with his head.”

Connacht, currently with two games in hand, will enjoy two home fixtures in succession – first against Ospreys on Saturday 7.35pm in a cross-conference match, and then the rescheduled match against Benetton on December 4th ahead European rugby’s start.