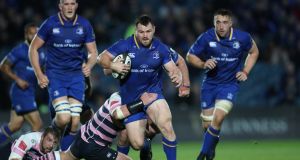 Cian Healy: 'If you want to get to the top of this, you have to beat the best. You don’t want to be looking for an easy route.' Photograph: Billy Stickland/Inpho

“We don’t have a hell of a lot of lads left that have won that cup,” says Cian Healy. Today the Leinster losehead prop is refocusing after the glory of Ireland’s recent Grand Slam. There can sometimes be a trough after summiting.

Healy though has been recharged by other things. His health and his form has allowed him to become the player he was, a player some believed he might never be again. Like Rob Kearney, the body holding together has allowed him reclamation of rightful place and status. Now the 2017 Lion, Jack McGrath, is chasing.

Healy is kind of right about the team. Depending on injuries, six or seven players who should play against Saracens on Sunday lined out in 2012 against Ulster in Leinster’s 42-14 win in front of a record crowd of 81,774.

Kearney, Healy and Johnny Sexton were there. Sean Cronin, Fergus McFadden and Devin Toner too and Sean O’Brien was man of the match. Isa Nacewa played on the left wing in his first Leinster incarnation.

“There’s a few of us left in there so it’s new to them [the younger players],” says Healy. “There is a winning mentality in those younger lads. You have the likes of ‘Cheese’ [James Ryan] that hasn’t lost a professional game.

“That’s what they are bringing to it. They have this expectancy and we have to push that on in what we deliver and what we expect of them in training. You have to understand that that just doesn’t happen.”

In Saracens, Healy sees a more canny team than England. Billy Vunipola won’t be there and the club’s director of rugby Mark McCall is sweating over the fitness of both Owen Farrell and George Kruis. But Saracens and Toulon have owned Europe for some time, sharing the last five trophies.

There is motivation in breaking that hegemony and, after the Six Nations, Irish players have become the embodiment of confidence. In Leinster that energy and mood has gone viral and the province, who won two-in-a-row before the Anglo-French winning streak are good enough to know where they belong.

“There’s probably a bit more creativity with the Sarries lads,” says Healy comparing them to England. “There aren’t as many one-out runners and things like that. Lads that are in their national squad do play pretty important roles and we will look to shut them out of the game.

“But they are also pivot players and not just looking for that physical game; they ask questions of your defence.

“It was kind of nice seeing that draw come through, seeing us end up with them. There were a few laughs about it. You finish top [of your pool] and you end up with Sarries! That’s the way you want to go. If you want to get to the top of this, you have to beat the best. You don’t want to be looking for an easy route.”

That could be construed as turning a negative into a positive. But Healy has learned from the Grand Slam win. The imperative to win the next game with no fallback is a particular type of demand. It requires precision and discipline, playing the right way at the right time, high level physical commitment and above all no critical errors. It is not easy.

“Test rugby is similar. If you want to do what we did, you have to consider that knockout rugby,” he says. “You can’t lose a game. Rugby where you’re under the most stress and pressure to perform and everything’s high-octane. That’s  far more fun than a league game. You can’t approach a league game as knockout rugby.

It is, he adds, easy to switch from the Grand Slam mode into a club win-or-bust mindset. The mentality is bang on, he says. The attitude is different but just right. There is some readjustment in the calls and the plays but all that takes is just a little bit of home work.

England’s home ground bristled with threat for good reason almost two weeks ago. The Aviva will become Leinster’s Twickenham and two-times European Cup champions Saracens will script it as English underdogs walking into the lion’s den. Leinster’s self-belief may allow them see it like that as well.

“You can fully guarantee they’ll bring that energy,” says Healy of the home crowd. “There’s a bit of an extra buzz around. It’s do-or-die.”