Connacht make one change as they target victory in Dragons’ den 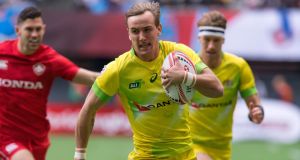 Connacht’s John Porch in action for Australia during a Sevens Rugby tournament in Canada last year. Porch has been included in Connacht’s squad for their clash with Dragons. Photograph: Inpho/Photosport/Icon Sportswire

Connacht make a second trip to Wales this season and will be hoping not to return empty-handed as they did in losing 18-10 to the Scarlets, a match that was played in horrendous conditions.

The Irish province was impressive in despatching Benetton 41-5 last time out at the Sportsground and coach Andy Friend has made just one alteration, handing Australian John Porch – he was an excellent Sevens player – a start on the right wing. On the bench Cillian Gallagher is rewarded for a series of good displays in the Celtic Cup.

Friend said: “Rodney Parade is a tough place to go and with the Dragons playing a more expansive game this season we know our defence has to be on top form, but we also need to be clinical in attack when opportunities arise. This is our last game in this block before a short break so we’re aiming to finish on a high before our run of 13 weeks of games.”

The Dragons lost heavily against Munster but bounced back by racking up over 50 points against Zebre in Italy. Dean Ryan is in his first season as director of rugby at the Dragons having fulfilled similar roles at Gloucester and the Worcester Warriors.

The Dragons are more expansive in their patterns, getting the best from outstanding young attacking players like fullback Jordan Williams and also some excellent backrow prospects in Taine Basham and Harrison Keddie, both of whom captained their country at underage level.

This is a game that Connacht will have targeted in the continuing development of the playing group from a results perspective.