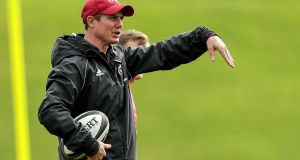 Munster have made four changes to the side that defeated Dragons in the opening round of the Pro14 for the trip to Nelson Mandela Bay Stadium against the Southern Kings on Saturday (kick-off 3pm Irish time).

O’Connor joins Kevin O’Byrne and Stephen Archer in the frontrow, while O’Shea partners Fineen Wycherley in the engine room.

It’s as you were in the backrow of Jack O’Donoghue, Tommy O’Donnell and Arno Botha, with O’Donnell taking over the captaincy duties this week.

Mathewson joins JJ Hanrahan in the halfback pairing, and with Rory Scannell switching to the 12 jersey Goggin comes in at outside centre in an otherwise unchanged backline.

Named in the replacements is academy hooker Diarmuid Barron, and the province’s short-term signing Jed Holloway, who is line to make his Pro14 debut.

Connacht head coach Andy Friend has made three changes to the Connacht starting team for the visit of Benetton to the Sportsground, also on Saturday (kick off 7.35pm).

Darragh Leader, Peter Robb and Paul Boyle all come into the side as Connacht hope to bounce back from a defeat away to Scarlets on the opening day of the season.

Speaking ahead of the game, Friend said: “While we were disappointed with the result last weekend, there is huge anticipation among the squad for our first home game of the season. We have set some really ambitious targets for the season ahead, particularly around our home form.

“We have made three changes to our starting team from last weekend. Some of those were down to one or two injuries we picked up and some are down to the depth we have in the squad. This week we have named Sean Masterson among the replacements. He is an excellent young backrow who has impressed already for the Connacht Eagles side. I’m confident that he is ready for that step up to Pro14 rugby this weekend”.

Johnston is the sole change to the Ulster squad that opened the 2019/20 season with a bonus point home win over Ospreys last Friday night.