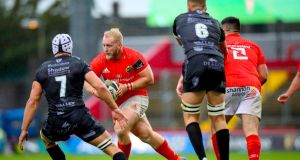 The magnitude of the task facing Munster can be gleaned from the fact that they face a Cheetahs team that have continued to purr in playing terms since claiming the Currie Cup, scoring 16 tries and 111 points in thumping wins over Glasgow Warriors and Ulster, both victories on their home patch.

The Irish province is also unbeaten in their first couple of matches this season but this game represents a real step up in the quality of the opposition. Munster coach Johann van Graan makes five changes from the victory over the Southern Kings, Jeremy Loughman, Rhys Marshall, Billy Holland, Tyler Bleyendaal and Nick McCarthy introduced into the starting team.

This is the last game in charge for Cheetahs head coach Franco Smith – it is also the South African team’s final home game until the new year – before he leaves to take up a new position and join the Italian national side and his team will be keen to ensure that he receives a memorable send-off.

Munster have never lost to the South African team in four previous meetings but to preserve that run would require an exceptional performance.

These matches represent opportunities in the absence of their Ireland squad contingent and none has grasped them more impressively than left wing Shane Daly, while Jack O’Donoghue has also excelled.

Referee Mike Adamson, a former Scottish Sevens international, prefers to let the game flow where possible but Munster won’t want to become embroiled in a “run-and-gun” approach that the home side are likely to adopt. The Cheetahs are eight point favourites, so for Munster a losing bonus point would constitute a fine effort in the circumstances.