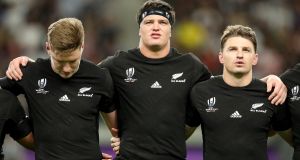 Jordie Barrett, Scott Barrett and Beauden Barrett of New Zealand line up for the national ahead of their win over Canada. Photograph: Hannah Peters/Getty Images

They came in their tens of thousands to see the one team that resonates here, New Zealand, queueing in their black jerseys in the rain more than four hours before the kick-off, a swarm so dense that stewards struggled to find space for coaches and chauffeured limousines to get through to the car park. It was chaotic, but no one went home disappointed as the holders, easing through the gears as if running in a new car, outclassed a committed Canada.

New Zealand secured the bonus point five minutes before half-time, but squandered four more opportunities through a mixture of dogged defending, handling errors in conditions which seemed no less humid for the roof being closed and the sloppiness that is often a by-product of mismatches.

Four tries in the opening 10 minutes of the second half, including one by Scott Barrett which followed earlier scores by his brothers Beauden and Jordie, doubled the score and gave an indication of what was said at half-time, although it also felt as if someone had belatedly turned on the air-conditioning. The brothers had already become the first trio of siblings to play for New Zealand at a World Cup, and they added another record by all scoring.

The All Blacks were crisp, slick and lethal, prompted by Sonny Williams who created three in a row with a dink, a timed pass after drawing the defence and a flick out of the back of his hand.

Canada’s moment came on 21 minutes when a Richie Mo’unga fumble was seized on by Gordon McRoirie near his 22. He found Lucas Rumball and the ball was moved to the Ulster outside-half Peter Nelson who took on Beauden Barrett only to be hauled down just short of the line. Not conceding a try was as important to the holders as maximising their opportunities.

Otherwise they tackled and tackled, their narrow defence exposed at times but they scrambled, desperate not to give anything away cheaply. The All Blacks moved away through their own skill rather than their opponents’ deficiencies, but it was hard not to feel for a team that included few front-line professionals and who tend to face the big boys mainly when a Rugby World Cup rolls around.

In the four years between the 2015 tournament and this, Canada had three fixtures against tier one nations, Italy at home and Ireland and Scotland away. Here, they have three in less than three weeks with Italy already faced and South Africa to come. As a model, international rugby makes little sense.

Canada kept defending, their sporadic attacks coming off turnovers. They conceded the most points of any side this tournament, but fewer than the 79 they leaked to the All Blacks at Wellington in 2011. Their World Cup will be defined by their match against Namibia, which will decide who doesn’t finish bottom of the pool.

For the All Blacks, it is all about success. It was their head coach Steve Hansen’s 103rd match in charge, equalling Graham Henry’s record, and the 90th time he entered a winning dressing room after a game. The danger for the All Blacks is that, with Namibia and Italy to come, their competitive edge may not be at its sharpest come the quarter-finals.

It happened in 2007, when Hansen was Henry’s assistant, a hard lesson absorbed. Here they were like Japan in slightly slower motion, the craft of Williams, Mo’unga, Beauden Barrett, Ben Smith and Ryan Crotty supplemented by the drive of Kieran Read, Shannon Frizell and Scott Barrett. Ardie Savea became the first player to wear goggles in a World Cup when he came on 10 minutes from the end.

Canada were not humiliated and were on the attack in the final minute when they lost the ball and Beauden Barrett was away on a 50-metre run. Andrew Coe chased him all the way, forcing the fullback to change the hand in which he carried the ball to ready himself for a fend off only to lose control of it. His burst took New Zealand to more than 900 metres running with the ball on a night when Canada attempted a couple short of 200 tackles, outgunned but not outfought.