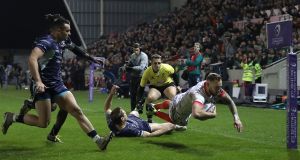 Sale Sharks’ Byron McGuigan goes over for a try against Connacht during the European Challenge Cup quarter-final match at the AJ Bell Stadium in Salford. Photograph: Martin Rickett/PA Wire

England remains the unhappiest hunting ground for Connacht as Sale inflicted a sixth defeat over the Irish province in European rugby.

Although it was the fourth year in succession Connacht had qualified for the Challenge Cup quarter-finals, history repeated itself at the AJ Bell Stadium. For the second time this season the English Premiership side came out on top at home, denying Connacht any hope of advancing to a fourth semi-final in this competition.

Steve Diamond’s Sale did enough damage in the first half as they bossed the exchanges, and produced a performance that had Andy Friend’s side on the backfoot throughout. Former Connacht outhalf, AJ MacGinty, just back from shoulder surgery, kicked 11-first half points, helping Sale to a 20-3 half-time lead from which Connacht would never recover.

With an eye on next week’s visit to Benetton in the Pro 14 and needing to rest some players, Friend had taken a risk in selecting a side missing key personnel, and they struggled to cope with Sale’s physicality in the opening half. That they persevered after half-time, and slowly started to reap rewards, is testament to the team’s growing character, but ultimately they came up short.

Connacht had gone into the dressingrooms at half-time 17-points in arrears, having nearly pulled off the perfect start.

Within minutes Jack Carty had intercepted an attacking Sale pass inside the Connacht 22. Running the length of the pitch, he was almost at the line when he was hauled down a metre from the posts by Denny Solomona. Although Kyle Godwin was up in support, the Aussie centre could not control Carty’s low pass that went to ground, and the opportunity was lost.

It turned out to be the closest Connacht would come to penetrating the Sale defence in the opening half, and although Carty was to open the scoring minutes later after Sale strayed offside, Sale side took control for the remainder of the half.

It was not long before left wing Byron McGuigan finished off an expansive move in the corner, and MacGinty knocked over the conversion to put the hosts into a 7-5 lead.

There were more signs of danger for Connacht when they conceded a scrum penalty, providing the hosts with another platform to attack. And the resulting penalty to touch turned into a try in the right corner by Solomona. As influential forwards James Phillips and Jono Ross sucked in the defence, MacGinty was able to spot the gap, sending a floating pass for Solomona to finish, and the Sale outhalf added the touchline conversion.

Connacht struggled to get any control on proceedings, not helped by an overcooked kick from Carty. But a series of drives proved fruitful when Sale, slowing the ball at the ruck, were penalised, but on this occasion the Connacht outhalf sent his kick wide of the posts.

Unable to gain momentum and on the back foot, Connacht conceded another penalty for not releasing at the breakdown with MacGinty adding another three points. As the penalties continued to mount, the Dublin native added another three-pointer on 33 minutes to extend the English Premiership’s side lead to 20-3.

A rare penalty against Sale at a maul – the same penalty which handed Connacht victory in the Sportsground in October – gave Connacht some relief, but the mistakes kept mounting, denying Connacht even one sniff the line over the 40 minutes.

It was not Connacht’s night when Carty, who did not have his best night with the boot, injured his shoulder just before the break and was forced to retire after the restart.

And to make matters worse another opportunity to kickstart a second-half revival failed when Connacht spurned a kick at goal, and Godwin’s kick for touch went dead.

The second half meandered as Connacht tried to produce some momentum. Sale lost Phillips to the sin-bin for a high tackle on Godwin, and it was during this period Connacht finally breached the Sale line, with Godwin grabbing a try, and Darragh Leader the conversion to reduce the arrears to 20-10 with 10 minutes remaining.

It was as good as it Connacht could do on a trying evening, in which they also lost Finlay Bealham with a suspected arm injury.

Replacements: F Bealham for Robertson McCoy (26 mins), J Maksymiw for Thornbury (42-48), T Daly for Carty (45), S Fitzgerald for Adeolokun and R Copeland for Masterson (both 54), C Blade for Marmion, D Heffernan for McCartney and Maksymiw for Cannon (all 60), D Buckley for McCabe (63), T McCartney for Bealham (80).