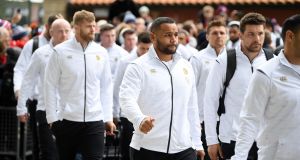 It is understood Ben Te’o and Billy Vunipola apologised to their England teammates for returning late to the hotel. Photograph: Getty Images

Ben Te’o and Billy Vunipola have found themselves in hot water after arriving late back at the England team hotel following an alcohol-fuelled night out, hours after their side’s second-half capitulation to Scotland in the Six Nations finale on Saturday.

It is understood both players breached team protocol by returning late to the hotel in Chiswick where England were based after the conclusion of the Six Nations.

England do not operate a curfew but team protocol dictates that players generally return together. Te’o and Vunipola were out until the early hours of Sunday morning without the rest of the squad. It has been claimed there was some upset caused when the players returned to the hotel but that has been denied by the Rugby Football Union.

The RFU insists the matter has been dealt with internally – and it is understood Te’o and Vunipola apologised to their teammates – but it remains to be seen if Eddie Jones will take the incident into account when compiling his World Cup training squad in the coming months.

Jones has taken a dim view of similar disciplinary breaches in the past and this incident only serves to compound England’s woes after shipping 38 unanswered points against Scotland and squandering a 31-7 half-time lead at Twickenham.

In August 2017, Jones made an example of Manu Tuilagi and Denny Solomona after they returned to the team hotel in Teddington at around 4am following a late-night drinking session. Both players were sent home from the training camp early. On this occasion, however, the squad dispersed on Sunday after England’s second-place finish in the Six Nations.

In the case of Tuilagi and Solomona, the pair were omitted from Jones’s training squad named the following month, though the former had suffered another knee injury and the latter was then included for the autumn internationals that year. On recalling Solomona in October 2017, Jones said: “He is very contrite about it. He knows he made a serious mistake and he knows if he makes it again things won’t be looking so good.”

With six months to go until the 2019 World Cup in Japan, Jones will be hoping the latest incident is not a sign of things to come after England’s World Cup preparations four years ago were plagued by unwanted headlines of players’ indiscretions.

In May 2015, Tuilagi apologised after his conviction for assaulting two female police officers and a taxi driver and was not considered for selection for the World Cup – though it is doubtful he would have been fit enough to take part – while Dylan Hartley was omitted owing to a four-week suspension imposed by the RFU for headbutting Jamie George.

On top of that, Danny Cipriani, who was ultimately not picked for the World Cup, was arrested on suspicion of drink-driving – more than a year later he was found guilty – the morning after starring in England’s victory over the Barbarians.

Vunipola started all five of England’s Six Nations matches this year, appearing in the competition for the first time since 2017 following three arm fractures in the space of 12 months. Te’o started just once, in the commanding victory against Italy, and came off the bench against Scotland on Saturday in the 77th minute.

Both players are expected to feature for their clubs on Saturday, with Saracens taking on Harlequins at the London Stadium and Worcester travelling to Bristol in a bottom-of-the-table clash.

Saracens are to rest the England captain, Owen Farrell, who has come in for criticism for his performance against Scotland, having been replaced by Jones for the final 10 minutes with George Ford coming on and scoring the try that rescued a draw.

Maro Itoje will not feature either because of a knee injury suffered against Ireland last month and subsequently exacerbated during an England training session. Saracens are hopeful he will be fit for their European Champions Cup quarter-final at home to Glasgow on Saturday week.