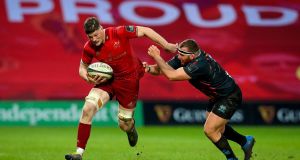 Munster, past masters at this quarter-final stage, have landed for their latest battle in Edinburgh very much locked and fully loaded, with a huge battalion from the Red Army there to roar them on.

In welcoming back his Irish front-liners, including Joey Carbery, and making 11 alterations from last week’s win over Zebre, Johann van Graan has made just one change from the starting side in the pool finale against Exeter, with Jack O’Donoghue preferred to Chris Cloete in the absence of Tommy O’Donnell. Indeed, otherwise it’s even the same 23, which given 10 of the starting team played in the Six Nations, is remarkable.

By contrast, Richard Cockerill opted to run out the bulk of Edinburgh’s frontline team for last week’s win over Leinster, save for shifting Darcy Graham to full-back and starting winger Damien Hoyland, centre Chris Dean, hooker Stuart McInally and lock Grant Gilchrist. Similarly though, all but two started their pool finale win over Montpellier.

As Cockerill has admitted, this is a meeting of like minds and spirits.

Edinburgh’s pack is effectively the Scottish pack, with the addition of South African loose-head Pierre Schoeman and big-carrying, off-loading Fijian number eight, Bill Mata, who would make most international back-rows.

With Hamish Watson back fit and also, as of last week, John Barclay in addition to James Ritchie, who is on the bench, they have backrow options aplenty. Add in McInally and Schoeman, and they have threats over the ball everywhere.

Under Cockerill, Edinburgh are constructed on the firmest of foundations in their set-pieces, kicking game and defence. They have probably got the best scrum Munster could come across in this competition.

Ala Saracens, they kick to chase rather than contest, put pressure on the opposition’s breakdown and look to win turnovers.

They don’t play a huge amount of creative rugby, but hold the ball, and have a very effective pick-and-go game through their forwards. They tend to wait for the right time to go wide through outhalf Jaco van der Walt, with a contrasting cutting edge in the forceful Duhan van der Merwe and the pace and footwork of Graham. That said, Blair Kinghorn is a big loss.

Munster need to keep their heads, deal with Edinburgh’s kicking game and set-pieces, and limit their poachers at the breakdown, in which case they perhaps have more of a creative spark in their backline.

Despite the often vast swathes of empty seats in Murrayfield – admittedly not a concern today – Edinburgh have won 17 of their last 19 European ties here and all but one game this season, when contriving to lose from 17-0 up against Cardiff. No matter the size of the Red Army, they too are also sure to be inspired by a record quarter-final attendance in the UK.

Munster also have their own poachers, none better than Tadhg Beirne, with support from Peter O’Mahony, CJ Stander and co. In what is likely to be an attritional arm wrestle, one can envisage plenty of collisions and turnovers, and a high penalty count and cards.

In last week’s Pau-Montpellier Top 14 game Pascal Gauzère brandished two red cards and when asked what might be the key today, van Graan immediately said: “Discipline. They play a very suffocating game, as do we. Discipline both sides of the ball and then, for me, the two teams are evenly matched so it comes down to big-time players stepping up.

“You just have to refer to the quarter-final last year,” added van Graan in reference to Munster’s win over Toulon. “I still see that moment in front of my eyes: Andrew Conway steps up and one player is the difference between two quality, matched sides. It might be the same this weekend.”

If so, Edinburgh have undoubted X factor, but Munster could have more in Beirne, Carbery, Chris Farrell, Keith Earls and Andrew Conway, and with that maybe one or two tries more in them too.