England head coach: ‘the last thing I want to do is spend eight weeks in a blazer’ 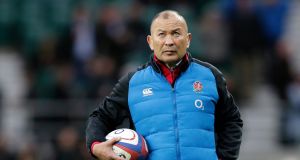 Eddie Jones has dismissed the role of Lions head coach as an “ambassador job” while refusing to rule out the possibility of succeeding Michael Cheika as Australia boss.

Jones insists he has no interest in leading the elite of British and Irish rugby to South Africa in 2021, in the process taking a dig at Warren Gatland who was in charge of the previous two tours.

Gatland recently masterminded his third Grand Slam with Wales and is favourite to continue in the post.

“The last thing I want to do is spend eight weeks in a blazer,” Jones told the Brisbane Courier Mail.

Gatland is also favourite to replace Jones after this autumn’s World Cup when his reign as Wales boss ends.

Beyond Japan 2019, Jones’ future is clouded in doubt despite a contract extension lasting until 2021 that is dependent on performance at the global showpiece.

And the Australian has done nothing to clarify his position by keeping the door ajar to reprising a role he performed from 2001-05 when the World Cup is over.

“I don’t think I would ever say ‘never’, but it’s not something I have really thought about,‘ Jones said.

“One thing Australia are not short of is talent. Cheika is in a good position. This could be his last hurrah and he’s got nothing to lose.”

Jones has suggested he does not expect to remain England head coach beyond the World Cup, claiming his future is in the hands of Twickenham’s hierarchy.

Acting chief executive Nigel Melville, however, still sees the Australian as being at the helm for a transition period until a replacement is appointed.

Melville insists various options are being considered despite the availability of Gatland, the Six Nations’ most successful coach who is a target for the Lions for their tour to South Africa and under-performing France.

“Eddie’s contracted until 2021 and the reason for that is that we see an opportunity after the World Cup to transition and keep momentum going,” Melville said.

“There’s not an executive search going on. We’re aware of the market and where we are. We need to look at options going forward and we’ve got time.

“We won’t be announcing anything until after the World Cup because that’s the point.

“We don’t want any distractions going into the World Cup because we want to make sure we’re focused on the World Cup.

Bill Sweeney has been appointed RFU chief executive but is still waiting for his release from the British Olympic Association.

“We don’t have a start date yet for Bill. The BOA have their recruitment process in place and are getting down to a shortlist now,” Melville said.

“We should have a date shortly. Hopefully he’ll be with us soon. He’s in touch with everything that’s going on and I’m in touch with him on a regular basis.”