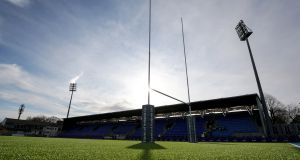 Clongowes just got better with every minute in coming from behind to deny Terenure in the Leinster Schools Senior Cup in Donnybrook on Wednesday.

All the whispers had been about the Clane school’s fine form leading into the competition, something they would not have been best pleased by that as they love to fly beneath the radar.

On the other hand, Terenure had shown precious little to suggest they were true title contenders all season long until they put on a show in the opening 20 minutes.

Outhalf Mattie Lynch pulled the strings and centre Matthew McGetrick-Stafford was a thunderbolt through the middle.

The problem for Terenure is that they created without finishing, wing Barra Dignam taken down by Michael Spillane and Lynch’s crossfield kick drifting just past the reaching Oisín Lydon.

Eventually, they worked a sublime move across their threequarter line, McGetrick-Stafford eating up the ground to put Dignam over for Lynch to convert on the angle in the 21st minute.

It was the calmness of Clongowes that took the eye, working their way into position with maximum efficiency for lock Jack Kearney to drive over, Oisín Devitt converting in the 23rd minute.

This was the signal for McGetrick-Stafford to take off again, cutting Clongowes deeply, only for his pass to escape Dignam’s fingertips.

Glad of the let-off, scrumhalf Devitt edged Clongowes in front from a close-range penalty near the end of the half.

It was a different story in the second period, with Tom Mulcair almost piling over, only for the vigilance of Lynch.

They stayed on point for captain Calum Dowling to ground the ball beside the post, Devitt converting to make it 17-7 in the 42nd minute.

Once McGetrick-Stafford did not connect with Dignam up the left, Mulcair took up the baton for Clongowes, spearing Terenure on the fringes to release centre Pete Maher for a picture-perfect try, with Devitt converting in the 50th minute.

Clongowes got better with the minutes, Maher shooting into a gap to make it easy for Dowling to secure his second try and Devitt’s fourth conversion.

Terenure did keep going to the end, replacement Jack Whelan picking up a try off the back of solid approach work and Lynch slotting the conversion.

Clongowes were not content to leave it at that, Devitt closing the show with a penalty in what was a warning shot across the bows of whoever they will play in the last eight.