After a disappointing World Cup, Stockdale found his feet again back with his Ulster fold 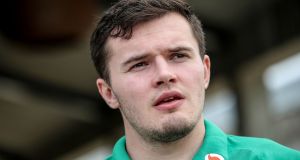 Few players quite had to rediscover their true selves after the World Cup than Jacob Stockdale, and as much as anyone, his return to form in recent weeks will have been welcomed by Andy Farrell and Mike Catt.

Stockdale’s form fell off during the World Cup, culminating in a particularly off-colour performance against the All Blacks in the quarter-final, albeit that game might have panned out entirely differently had Stockdale held an attempted intercept early on.

Instead, the penalty he conceded in that action led to Richie Mo’unga opening the scoring, and that rather set the tone for his night. Like others though, returning to the warm embrace of his in-form province proved just the tonic.

After a couple of assured and creative outings for Ulster at fullback in the back-to-back wins over Harlequins, Stockdale touched down against Munster. That ended an unusual try-scoring drought of ten games for Ulster dating back to January last year, and a nine-game barren spell for province and country dating back to his brace in the warm-up win over Wales last August.

The leading try scorer in his first Six Nations in 2018, lest we forget Stockdale is still only 23 – his game-breaking ball-carrying and try-scoring are too potent to overlook when in form.

It was class to get back into the swing of things playing well for Ulster, but international rugby is another step up from that

Asked to reflect on how his and Ireland’s trek to Japan ended, Stockdale said: “I wouldn’t say it’s necessarily forgetting about it, it’s just about not dwelling on it. I think they are two quite different things. Yeah, I accept I didn’t have a [good] World Cup.”

“I didn’t really enjoy the World Cup in a rugby sense,” he revealed. “It was pretty disappointing from that point of view. But you just have to park that and say ‘That’s not me, I’m not defined by that. I’m defined by how I move forward.’ Obviously coming in the camp it’s very different now. With new management, new styles, they’ve really tried to shake everything up and it feels completely different. And to be honest, it’s been really enjoyable coming back in and seeing the guys who you hung out with for so long in Japan.”

Returning to the Ulster fold was the first step on the road to redemption, but with a rider.

“Form in an Ulster shirt and form in an Ireland shirt are two very different things. It was class to get back into the swing of things playing well for Ulster, but international rugby is another step up from that.”

“Faz has come in and brought a lot of new approaches than Joe would have. And I think the guys have responded really well to them and are really enjoying them which as a player is obviously what you want. When you come in and things are different and things are new you feel like everything is kind of starting from scratch again which is exciting.”

Asked if this was new drills and coaching or a changed atmosphere, Stockdale said: “It’s probably a wee bit of both. Our training has definitely changed a wee bit. Like from this week I’ve noticed a lot more skills’ focus. We’re integrating skills into each of our gym sessions which is really exciting and quite similar to what we do at Ulster. So it’s kind of nice to get that synergy there.

“The atmosphere in camp this week has been really good. And I think that’s partially down to what Faz has brought. He obviously wants to create a really inclusive environment. I think it’s also down to the players. Everyone has really bought into it and are just excited to get moving forward.”

There is also a new attack coach, and Stockdale is also clearly enthused by Catt’s appointment.

“Catty is pretty great, he is very enthusiastic and he likes guys to have a bit of fun. At the same time, he wants to make sure everybody trains as best they can and is switched on for training which is pretty much all you can really ask from a coach.

“I think that during the Six Nations moving forward, you’re probably going to see a bit of a change in our attack, I’m not going to give too much away now. But we’re looking a bit more fluid and there is a bit more licence to play which is obviously exciting for us.”