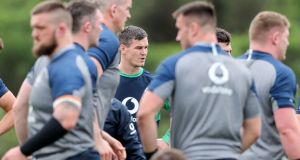 Ireland get their 2020 underway against Scotland on Saturday. Photo: Dan Sheridan/Inpho

Ireland’s 10 Test matches this year will determine how they will be seeded for the 2023 Rugby World Cup when the draw is made in November.

World Rugby announced on Wednesday that the draw for the tournament in France in will take place three years out after this year’s November internationals.

Based on current rankings Ireland would be in band two meaning a potential pool stage draw with South Africa, New Zealand, England or Wales.

However, with five Six Nations matches, two summer Tests and three November Tests to be played before the draw, Andy Farrell’s team can move their way up the rankings and into band one, therefore avoiding the real heavy-hitters.

As the rankings currently stand, band two is made up of Ireland, Australia, France and Japan while band three is Scotland, Argentina, Fiji and Italy.

The remaining eight teams will come through the global qualification process, which kicks off later this year and will be allocated into bands four and five based on relative strength.