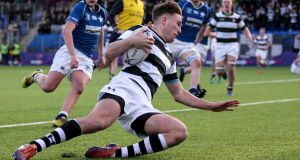 Not even producing a serious candidate for the best try of the Leinster Senior Cup will come as a meaningful consolation for St Mary’s College as they bowed out to Belvedere in the first round at Energia Park on Tuesday.

The Rathmines school were in the right frame of mind to cause something of an upset when starting both halves the better, moving the ball nicely in an effort to undermine their opponents’ heavier firepower. Scrumhalf Jack Lundy fired the opening points in the fifth minute and the impression that Belvedere looked edgy was not helped when flanker Eoghan Rutledge was sin-binned for a rash tip-tackle.

St Mary’s weren’t able to press home the one-man advantage however, and they were soon down a man themselves when outhalf Daragh Gilbourne was sin-binned for making contact on Dylan O’Grady in the air.

Now, it was Belvedere’s chance to make the extra player tell - and the lively Daniel Hawkshaw caused consternation with a rolling kick which left Max Svejdar outnumbered three-to-one, forcing Gregory Monaghan to come to the rescue.

All the while, Belvedere were winning the battle for territory, eventually making the breakthrough when Rutledge dived in from close range.

From there, Belvedere were methodical in moving forward, centre Jed Tormey breaching the defence for O’Grady to make it 12-3 on the half-time whistle.

The second period began just as the first one had, with St Mary’s probing, as Belvedere had to reorganise with the loss of O’Grady and lock Brian Bolger in quick succession.

In the 45th minute Robert Nolan stepped up to receive Svejdar’s flat pass, taking off around his own 22, getting beyond the reach of Simon Murphy and accelerating away from the defence. Lundy’s conversion then closed it to 13-10.

Belvedere didn’t show any signs of panic, merely going back to their game plan, taking the ball up until the time was right to feed the speeding Daniel Hawkshaw for 17-10 in the 52nd minute.

Late on Nolan got through the first line of defence to apply enough pressure for Lundy to strike three points, coming close, just not close enough.