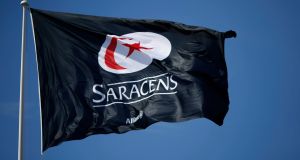 England’s Six Nations build-up has been overshadowed by Saracens’ relegation from the Premiership for salary cap breaches. Photograph: PA

The disciplinary report that led to Saracens being relegated from the Premiership found the club’s owner, Nigel Wray, broke the rules by entering into ventures totalling £1.3m (€1.5m) with the England players Maro Itoje, Billy and Mako Vunipola and Chris Ashton.

The club was docked 35 points and fined £5.3m in November for breaking Premiership Rugby’s £7m salary cap. Earlier this month Wray stepped down as the chairman and the club subsequently agreed it would be relegated at the end of this season.

It has now come to light that the disciplinary panel advised against the club’s relegation, believing it would be a disproportionate punishment.

“We accept the breaches were not deliberate but in our view they were reckless,” the panel wrote in their report. “We consider that to impose a deduction of 70 points in one salary cap year is disproportionate and is not required to satisfy the underlying purpose of the relegations.”

The Saracens chairman, Neil Golding, had called for the report to be made public after Premiership Rugby said the club had requested it be kept secret.

Among the most serious charges in the report is the revelation the club paid £1.6m for a 30 per cent stake in Itoje’s image rights company, based on a valuation by PwC. However, Premiership Rugby said the shares were only worth £800,000 and that Saracens overpaid for Itoje’s image rights so the club could come in under the salary cap by paying him less.

According to Sky News, the report noted there was no evidence Itoje had attended any hospitality events and was not paid on a per-event basis, meaning it was a salary benefit and not a commercial arrangement.

Nigel Wray also made a series of investments into companies run by Saracens players – including £250,000 into Itoje’s company and £220,000 into one owned by Richard Wigglesworth. Another £450,000 was given to Vuniprop, a company owned by the brothers Billy and Mako Vunipola, to enable them to buy a house. Renovation costs were also loaned, interest free by Wray.

In his witness statement, Wray said these payments were “bona fide commercial transactions with a number of players based on the merit of those investments, not, as PRL (Premiership Rugby Limited) suggests, in order to provide an additional reward to players for playing their rugby at the club.”

Saracens were also found to have breached the salary cap by £319,600 with regard to a £1.4m property bought by Ashton, which Wray and another director paid 20% towards. The suggestion in the report was that this was a benefit and equivalent to salary in kind. Saracens’ defence was that Ashton left the club shortly after the property was bought, meaning it could not have been a benefit for playing for the club.

There is also no suggestion or evidence that any player was complicit in any of the club’s actions.

Saracens’ international players have been given the all clear by Eddie Jones and Warren Gatland to take a “sabbatical” season in the Championship knowing they will still be selected for England and the Lions next year if they remain fit and in form.

Mark McCall, the Saracens coach, said the plan could lead to players such as Owen Farrell and Itoje staying at the club while making only occasional appearances in the second tier. This would enable them to recharge their batteries for the autumn internationals, the Six Nations and the tour of South Africa.

“A key driver for our established international players is whether they would be selected by Eddie for the autumn internationals and Six Nations while playing in the Championship,” McCall said.

“Obviously there is a lot who also want to go on the Lions at the end of next year. However Eddie is on the whole happy to select players who are established, Warren the same.”

McCall cited the cases of Richie McCaw and Dan Carter, who went on a sabbatical and then returned to guide New Zealand to World Cup glory in 2015, as showing the benefits of such an approach.

He added: “A lot of these players are at the stage where they have been on this treadmill for 10 years. I think they are seeing it as a positive where next year can be one where they freshen up, physically recover and get better, play enough rugby and go on a Lions tour at the end of it fresh, which is not normal.”