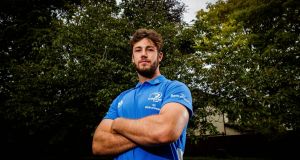 The mantle of expectation has sat easily on the broad shoulders of the six foot four inch Doris.

Caelan Doris will win his first cap in Ireland’s opening Six Nations match against Scotland at the Aviva stadium on Saturday, recognition of his superb form for Leinster this season and the qualities that he will bring to the test arena.

It didn’t require the foresight of a soothsayer to predict the ascent of the 21-year-old number eight to international rugby as his ability has long since flagged that notion; a precocious talent that hugged tightly to a remarkable overachieving arc since his schooldays at Blackrock College.

Born in the hamlet of Lacken, north Mayo, a few miles from the village of Kilalla, and a further 20-minutes from the town of Ballina he was educated at the local primary school. There were two people in his class and 35 in total; culturally the move to Blackrock as a boarder at the behest of his Dublin born parents - his father Chris went there - would have taken a little acclimatisation.

Having been introduced to rugby at Ballina RFC, Doris spent five years on cup teams in Blackrock, two on the JCT and three on the SCT. He was just two months overage for the Junior team when he played as a 15-year-old on the Senior team in fourth year, an impressive achievement physically, especially for a forward.

His granny lived close to Donnybrook and he recalled the sounds of rugby being played there from his childhood. He also explained in an interview with the Sunday Independent how his father, while artist in residence with the Mayo County Council, spent 40 days and nights at the top of Croagh Patrick interviewing pilgrims as part of a ‘social sculpture’.

He explained: “Yeah, he’ll kill me for not knowing this: it was a kind of conceptual art thing. He’s done a few different things like that. I can’t think of the right word for it. My mother carried me up so I was obviously pretty small. I actually don’t know too much about it other than that he spent 40 days and 40 nights up there. Don’t know what he really did up there, how he got his food or anything.”

He raced through the representative pathway, Leinster and Ireland Schools, culminating in two years on the Ireland Under-20 team - he first played an 18-year-old - the second as captain. He made his Leinster senior debut against Connacht in April, 2018 and has since gone on to make 29 appearances, starting four of Leinster’s Champions Cup pool matches this season in the absence of the injured Jack Conan.

Doris and Max Deegan (23), the 2016 Under-20 Player of the Year, have both excelled in the number eight jersey, and other numbers in the case of Deegan, for Leinster, winning a succession of man-of-the-match awards and driving each other to greater heights. The mantle of expectation has sat easily on the broad shoulders of the six foot four inch, 16 and a half stone, forward.

He recently outlined the areas of his game that he believes still require refining. “Just continue winning collisions on both sides of the ball, making as many metres as possible off carries and hopefully freeing up my hands and bringing more off-loads back into the game as well, which was probably one of my strengths at underage level. Obviously it’s harder again at this level but hopefully that will eventually shine through.”

In his final year of a Psychology degree, he had planned to spend the month of January, when time permitted, undertaking a research project on mental toughness and if it affects a player’s ability to perform as capably away as at home. He will have to shelve that project for a while with his new found status; albeit that over the next seven weeks he will be able to accumulate further firsthand material.