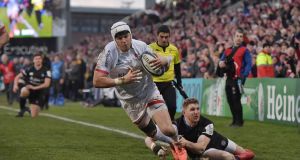 Ulster huffed and puffed, and got there in the end. Clermont’s 26-19 win over Harlequins ensured the French topped Pool Three and so this somewhat weary performance, at the end of this 13-game chunk of the season, was enough to secure second place for Dan McFarland’s side.

This ensured them of the best runners-up slot and with it a sixth seeding in the last-eight, which in turn will mean an away quarter-final against Exeter or possibly one of the trio of French heavyweights.

For much of a cold afternoon in Belfast this did not go to script, with the sides drawing 7-7 at half-time before, ultimately, they sparked into life to register what proved a decisive double whammy at the start of the second-half.

Will Addison looked like his day might be done with an early head injury but fortunately for Munster he returned with his head bandaged underneath a white scrum cap, for he was creator-in-chief of the first of those and finished off the second.

Ulster weren’t helped by a pedantic performance by the French referee Alexandre Ruiz and the 9-6 penalty count against them was depite a late flurry of decisions in their favour. Yet, ironically, Bath were reduced to 14 men by the first-half sin-binning of flanker Tom Ellis and a late red card for their replacement hooker Ross Batty, following a high shot on John Cooney.

Nevertheless Bath, merely through their efficiency at set-piece and in defence, largely frustrated Ulster for much of the game. Ulster missed Marty Moore’s scrummaging, and the home side were further handicapped by losing Tom O’Toole - picked ahead of Moore in the Irish squad - before the half hour mark with what seemed like a rib injury.

They were continually penalised there and their lineout and maul malfunctioned on a couple of occasions inside the Bath 22 as well.

The visitors had clearly done their homework, doubling up on Ulster’s primary ball-carriers, Marcel Coetzee and Stuart McCloskey, and without go-forward ball from those sources, the home side struggled to generate momentum.

Freddie Burns was content to kick for territory and often found grass in the backfield, and when Bath ran the ball they made his brother Billy make plenty of tackles.

In all of this an Ulster side showing just one change looked a little weary after their exertions in Clermont, especially when taking something of a battering in the second-half at the Stade Michelin, whereas Bath looked regenerated after.

But no-one can doubt their spirit, and they re-emerged with new intent, especially at the breakdown, while Billy Burns brought more control, even if their performance began to drift a little after those quickfire tries by Robert Balouocoune, who again caught the eye, and Addison.

Initially, Ulster were quickly into their stride and using the full width of the pitch. Twice they went wide left to Jacob Stockdale, and then to Robert Baloucoune on the opposite touchline, where his sleight of hand in popping the ball one-handed behind his back (so good most of the crowd appreciated it even more when replayed) and Will Addison’s ability to offload inside off a Bath player earned an attacking lineout.

Iain Henderson called Rob Herring’s throw on himself and although the ball hit the deck from the strong maul, Marcell Coetzee picked up and reached out for the finish. After recourse to replays, the try was awarded and converted by Cooney.

However, any Bath team containing Sam Underhill has quality, especially over the ball, an ability which earned the visitors a penalty and a prolonged bout of attacking, but Freddie Burns missed a relative sitter off the tee. However that spell did see Addison rise groggily to his feet when tackling Tom Homer head on, and he was replaced by Craig Gilroy clutching a blood wound at the right side of his head.

Stockdale moved to fullback and after Jordi Murphy had been penalised for not rolling away, Ulster were defending off a lineout maul again. What’s more, in attempting to cover a crosskick by Freddie Burns, Stockdale was beaten by a wicked bounce back over his head which allowed Ruaridh McConnochie a touchdown.

Although the crowd were unconvinced about the grounding, Ruiz did not go to his TMO before Freddie Burns’ conversion leveled matters.

His brother, Billy, then sparked Ulster into life with a superb inside offload to Coetzee on halfway. The brilliant South African number eight made huge ground with the help of a deft dummy before then failing to hit Gilroy with the try-scoring pass, although Cooney was no longer an option on the inside after being pushed from behind onto the ground by Tom Ellis.

After recourse to video replays, the Bath flanker was binned, but no penalty try was awarded and, remarkably, it was Ulster’s only penalty in the first 72 minutes. In two poor set-piece moments for two of Ulster’s Irish frontrow contingent, Rob Herring’s throw was crooked and O’Toole was pinged at the ensuing scrum.

Ulster’s chances of making their advantage tell wasn’t helped by a couple of loose passes, the second of which was dropped by Addison, who returned with a white scrum cap to protect the running repairs on his blood wound.

There was another knock-on by Sean Reidy as the atmosphere fell a little flat and in another botched attempt to vary the point of attack, Henderson couldn’t gather Coetzee’s tip-on before Ellis returned.

A clever blindside kick by Cooney off a turnover forced Homer to carry over the line, and somehow the French assistant referee missed a clear forward pass inside by the Bath fullback to McConnochie. This was compounded by Ulster’s maul being held up for another turnover, and there was another feather in the Bath pack’s cap when their scrum won a penalty.

Ulster and their fans alike were left frustrated by a half-time scoreline of 7-7.

Ironically those who were late back to their seats would have been more frustrated as, with a flea or three in their ears from Dan McFarland, Dwayne Peel and Jared Payne, Ulster quickly regained the lead through Baloucoune.

It began with Coetzee winning a turnover and a few phases later Billy Burns again carried well into contact and freed his left hand to find Addison. In a narrow right-hand corridor there still didn’t seem much on, but Addison stepped Gabe Hamer-Webb and dummied McConnochie to pierce the defensive line and draw Homer, before offloading out the back off his right hand for the speedy Robert Baloucoune to complete a fine try. Cooney even converted from near the touchline.

Their momentum was only briefly interrupted by a Freddie Burns penalty when Reidy was pinged for going off his feet, Ulster striking again immediately when McCloskey took Billy Burns’ pass to draw in defenders and float a right to left pass for Stockdale, whose well-timed pass gave Addison the run-in this time and his side a 19-10 lead. Soon after Addison removed the white scrum cap over his black bandaging to be replaced by Gilroy.

As Ulster struggled to pull further away, the home crowd sought to spark their side back into life, but in their push for a fourth try they continued to force things and make mistakes, with no initial impact from the bench.

Instead, the penalty count of, at that point, 8-1 hurt Ulster when Bath went to the corner and mauled impressively over the line to make it a four-point game, Ross Batty with the score.

Ulster were being forced to kick from deep, whereupon Stockdale shaped to do so but instead left two men in his wake when stepping away from them. Billy Burns then crosskicked to Baloucoune, with Luke Marshall, Kieran Treadwell and Cooney linking inside, before the scrum-half offloaded to the supporting Henderson and his deflected pass eventually ricocheted for Treadwell to claim the touchdown.

For the second, Cooney was caught high by Batty, and had to be replaced by Dave Shanahan. Cooney had already been tackled by Underhill, and Batty, with little time to react, appeared to be extending his arms before catching Cooney on the chin. Again Ruiz took an age to make his decision and explain it to the two captains and Batty before brandishing a red card.

To a thunderous roar, Billy Burns’ penalty made it 22-15.

Bath came looking for the draw, but a fine tackle by Herring on Chris Cook allowed Coetzee to poach for the penalty. He didn’t appear to be supporting his own body weight, but Ruiz is nothing if not inconsistent, and another home penalty followed against Lucas Noguera for not releasing. Alas, fittingly, Ulster mucked up the lineout again before Stockdale ended a messy finale by kicking the ball dead.

Not Ulster’s best performance of the season, but they’re in the quarter-finals for the second year running.

1 Gerry Thornley: England primed to show their best against Ireland
2 Should fans be allowed drink in the stand at sporting events?
3 Mako Vunipola to miss Ireland game for family reasons
4 Man City’s Abu Dhabi owners not the sort to back down over ban
5 Frank Lampard says Harry Maguire should have been sent off
Real news has value SUBSCRIBE

Rowing: Ireland women to trial in Italy 13:14
Son Heung-min out for several weeks with broken arm 12:48
Mako Vunipola to miss Ireland game for family reasons 12:51
Man City’s Abu Dhabi owners not the sort to back down over ban 10:51
Pints and sports events; England ready to show their best 07:30
Here is your handy guide to sport on television this week