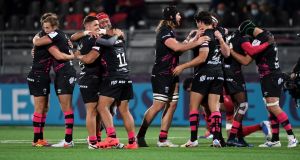 The Bristol sport project has its first European title. The city’s rugby team journeyed to the south of France to take on the might of Toulon, themselves regulars on the European honours board. That they prevailed is one thing; that they might have prevailed by even more showed their intention to establish Bristol as a rugby power has to be taken seriously.

Six penalties from the boot of Callum Sheedy formed the bedrock, two in the last five minutes to take the game beyond the French. But the real difference was two wonderful tries, one from Harry Randall after 15 seconds, the other by Max Malins on the hour. Toulon were well beaten. It feels weird just to write it, so contrasting the fortunes of both clubs’ recent history.

There is little surreal about the surreal any more, but Bristol’s approach to this game was hardly conventional. Quite apart from the need to fly in late and not leave their hotel, they lost the services of captain Steve Luatua, whose wife gave birth to a daughter just as Bristol were stretching off their charter flight.

Concurrently, the news broke that this final might not represent the end of this weirdest of seasons after all. The memory of their bracing defeat last weekend to Wasps was still smarting, only for the suggestion to emerge that that particular semi-final defeat might not have been so terminal after all. Wasps have their own outbreak of Covid to contend with, and if they cannot contain it Bristol would step up to face Exeter next weekend in the final in a bid to become the first losing semi-finalist champions the history of sport.

They proceeded to shake all such concerns from their minds immediately. From the kick-off, no less, Semi Radradra exchanged passes with Alapati Leiua to burst out of the 22 and send Harry Randall streaking clear from just over halfway - 15 seconds gone. A couple of minutes later, Callum Sheedy landed a penalty to earn Bristol a 10-0 lead. Easy.

Only a few minutes later again, though, and Toulon had replied. A mix-up in Bristol’s midfield allowed Bryce Heem to capitalise, before Bristol’s indiscipline ceded a six-point deficit, Louis Carbonel’s three penalties edging Toulon 16-10 ahead.

The Bears will have felt robbed. Joe Joyce seemed to have finished a beautiful, sweeping team try in the corner just shy of the half-hour, but the TMO decreed the last pass forward. It was close. As was Harry Thacker in the middle of a driving maul, but he fumbled as he tried to touch down.

As the hour mark approached, Sheedy had rectified those lapses by winning the third quarter’s duel of the fly-halves, three penalties to one, to leave the scores poised. The mighty Ben Earl was swift over the ball to win the equalising penalty, forcing the even mightier Masivesi Dakuwaqa, on for Heem in the first half, to hold on.

Sheedy has had to wrestle for his place, despite his recent call-up to the Wales squad, with the visiting Max Malins from Saracens, but the two were able to showcase their respective wares for Bristol’s second try on the hour.

Sheedy’s lovely kick to the corner pinned Toulon in their own 22. When the Frenchmen overthrew the subsequent line-out, they hacked the ball away only for Leiua to feed Malins. With unseemly ease, the full-back accelerated between Toulon’s centres to glide to the line for a 26-19 lead, as the game entered the final quarter.

Toulon, inevitably, cranked up the pressure, sending their mighty runners pounding at the heart of the Bristol defence. Bristol held strong for one goal-line, but a hinging at scrum time offered Carbonel the chance to pull three points back in the 71st minute. He pulled his shot wide.

Sheedy was not as wasteful two minutes later, nor again two minutes from time. Bristol head into yet another uncertain week with a first European title. – Guardian