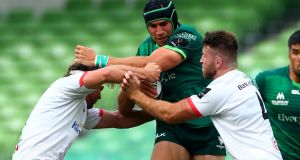 Connacht secondrow Ultan Dillane has been called into the Ireland squad for the remaining Six Nations games against Italy and France. Photograph: James Crombie/Inpho

Following on from the loss of Jordan Larmour for the entirety of Ireland’s forthcoming six Test programme with the dislocated shoulder he suffered against Benetton last Saturday, 21-year-old lock Ryan Baird has been ruled out of the rearranged Six Nations games at home to Italy next Saturday week and France in Paris seven days later.

Baird suffered an abductor strain in the same game and in confirming that Larmour “will not be available to play any role in this autumn international window” an IRFU statement added: that the uncapped Baird “has been ruled out of the two remaining Six Nations fixtures.”

Connacht’s Ultan Dillane has been added to the squad.

Meanwhile, Finlay Bealham and Dave Heffernan are progressing through the return to play protocols after suffering head knocks in Connacht’s defeat by Cardiff.

The Leinster trio of Johnny Sexton (hamstring), Rónan Kelleher (quad) and Andrew Porter (hamstring) will all “be monitored this week with a view to commencing training next week.”

Furthermore, Peter O’Mahony and Chris Farrell were identified as close contacts of a Munster player who tested positive for Covid-19 early last week, although the statement added both players “are Covid clear and will complete the period of isolation before joining the squad on Monday.”

The rest of the squad convened on Wednesday at the High Performance Centre in Abbotstown, and the statement also confirmed: “All players and management produced negative PCR tests on Monday ahead of entering national camp.”

1 Ireland, France or England? Who needs what to win the 2020 Six Nations
2 America at Large: Golfers guilty of legitimising Trump’s toxic regime
3 ‘This is not a personality contest’ - Jack Nicklaus endorses Donald Trump
4 Football 2020: It’s a knockout revisited – ‘You played, you lost, you went home’
5 Solskjær’s stock is on the rise again after clever squad rotation
Real news has value SUBSCRIBE