Former Munster teammate Donnacha Ryan has been named on the bench 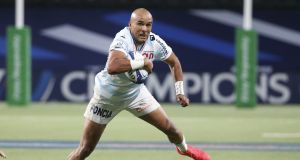 Simon Zebo will line out at fullback for the Champions Cup final on Saturday. Photo: Jean Catuffe/Getty Images

Simon Zebo has been named at fullback in the Racing 92 team that will contest the Heineken Champions Cup final against the Exeter Chiefs at the Ashton Gate stadium in Bristol.

Fellow Irish international and former Munster teammate Donnacha Ryan is named among the replacements as a fit again Bernard Le Roux is chosen to partner ex All Black Dominic Bird in the secondrow.

Henry Chavancy returns to captain the French side replacing Olivier Klemenczak in the centre with Louis Dupichot coming in for Teddy Thomas on the right wing; the latter’s absence a blow. Australian international Kurtley Beale is named on the bench.

Exeter Chiefs also have a couple of Irish players in their matchday 23, Ian Whitten will wear the number 12 jersey while the 36-year-old Sandy Park icon Gareth Steenson, who retires from rugby after the match, is named among the replacements.

The Chiefs have made a change in the backrow with Jacques Vermeulen replacing Sam Skinner, the latter named among the replacements, which also contains Jannes Kirsten in a change from the semi-final personnel.

1 Seán O’Brien: Anger over my parents’ break-up never left me
2 Hugo Keenan and Will Connors: The best of friends, the best of debuts
3 Ireland get the job done against Italy to keep alive Six Nations hopes
4 France warm up for Ireland with impressive win over Wales
5 Ireland 50 Italy 17: Ireland player ratings
Real news has value SUBSCRIBE