All you need to know: Ireland v France 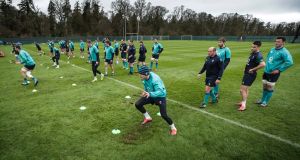 The Ireland squad during a training session at Carton House. Photograph: Billy Stickland/Inpho

A thrilling denouement to the 2019 Six Nations awaits - just two rounds of fixtures remain, and three sides still have hopes of being crowned champions.

Among those sides are Ireland, who welcome France to the Dublin on Sunday needing a victory to spread some sunshine after what has been a tricky four weeks.

Indeed, Joe Schmidt’s side were well beaten on the tournament’s opening weekend and have failed to click subsequently, seeing off Scotland and Italy without ever looking entirely convincing.

Granted, expectations were higher than ever heading into this year’s Championship - and it was always going to be a tall order for Ireland to repeat the Grand Slam success of 2018.

But while hopes of defending the title are now slim, an emphatic victory over Les Bleus this weekend would breathe new life into not only Ireland’s campaign but more importantly their year, as Japan hovers menacingly into view.

Jacques Brunel’s French were in a state of disrepair after their humbling at Twickenham last month, but they are rejuvenated following a third round win over Scotland.

The tables have turned significantly in this fixture - Ireland used to be the plucky underdogs, France the dominant force - but at the Aviva it will be the visitors looking to upset the odds.

Their chances of doing so look slim - but chances are they will have a good go regardless. There’s plenty on the line for both sides, and a cracker could be in store. Here is all you need to know ahead of Sunday’s match.

Ireland welcome France to Dublin in the fourth round of the 2019 Six Nations, at the Aviva Stadium.

The game kicks off at 3pm on Sunday, March 10th.

The game is being shown free-to-air by Virgin Media One (coverage starting at 2pm) and on ITV (coverage 2.15pm). And, as ever, you can follow all of the action via the Irish Times liveblog from 2.20pm.

As everybody knows by now, Ireland’s title defence started in miserable fashion, with England sacking Lansdowne Road on the opening weekend. Joe Schmidt’s side have since bounced back with two victories against Scotland and Italy, although the manner of them has led to plenty of soul searching, and questioning over whether a Rugby World Cup challenge is still just a pipe dream. Whether Ireland really have peaked too early remains to be seen, but a win over France should provide the momentum needed to travel to Cardiff with tails up on the tournament’s closing weekend. With plenty of big guns returning, perhaps Ireland’s slow start could ultimately prove the catalyst for another vintage year.

If Ireland’s start to this year’s Six Nations was disappointing then France’s was truly disastrous. Les Bleus conspired to throw it away against Wales on the opening weekend before being roundly thumped by England at Twickenham a week later. However, just as they seemed to be lurching towards rock bottom, the French have been dragged back into the light by their dashing new breed. Jacques Brunel turned to youth for the third round visit of Scotland and his faith was repaid, with Romain Ntamack, Demba Bamba, Antoine Dupont and Thomas Ramos - average combined age of 21 - inspiring a 27-10 win in Paris. Whether this youthful rebellion will be enough to secure victory in Dublin is doubtful, but fears over the future of French rugby have been allayed somewhat.

Joey Carbery, Robbie Henshaw and Dan Leavy have been ruled out through injury, and Sean Cronin was not selected in Wednesday’s 37-man training squad. Nevertheless Garry Ringrose, CJ Stander and Kieran Marmion all return. Gerry Thornley thinks Ringrose, Cian Healy, Rory Best, James Ryan and Iain Henderson, all could well come back into the starting team which will be announced on Friday.

Jacques Brunel has named an unchanged France team and matchday 23 from that which defeated Scotland - keeping faith in young halfbacks Dupont and Ntamack. It’s the first time in his tenure to name the same team for consecutive matches. Scrumhalf Morgan Parra, who along with outhalf Camille Lopez had been omitted for the Scotland game after criticising the management, has been ruled out due to injury. Lopez does not feature in the team, either.

As Ireland’s star has continued to rise France’s has been slowly extinguishing. The French used to have a psychological grip on the Irish - and particularly the golden crop of the mid 00’s. Indeed Les Bleus won seven-straight fixtures against Ireland between 2003 and 2008, including two galling Rugby World Cup defeats.

Since 2000 there have been 19 Six Nations encounters - Ireland winning eight, France nine, and two draws. Honours could be even after Sunday.

In the six competitive matches between Ireland and France since 2014, five Six Nations games and the World Cup clash at the Principality Stadium in 2015, Ireland have conceded just five tries to France and scored six in the process

John O’Sullivan’s rugby statistics column explains that Ireland can beat the French without needing to score too many tries: “Ireland don’t need to score tries to win these matches but there’s little doubt that they’d prefer to have more than one in the last 320 minutes of rugby against France.”

Ireland are hot favourites for Sunday’s clash, with the bookies not swayed by France’s win in Scotland:

Conditions in Dublin on Sunday are set to be dry, with temperatures down at five degrees.

New Zealand’s Ben O’Keefee is in charge of proceedings in Dublin.

A strong France is good for rugby - just not this weekend!