Coach Andy Friend targets his first away win against Scottish side 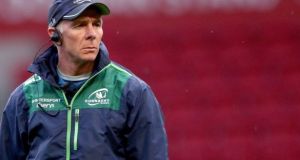 Connacht have been forced to overcome unexpected hurdles this week as they prepare to take on Edinburgh in Murrayfield on Sunday.

The province had its first positive coronavirus case in an academy player who had been self-isolating for a week prior to the test. As both academy and senior players train together, this has necessitated daily testing for all players and staff, and to date all have been clear.

“It has now, and it has been dealt with very well. We continue to be really strict and diligent around our restrictions and the guidelines that are in place.”

It comes in a week when Connacht are preparing for their third Pro14 fixture without seven of their front-line players who are involved in the Irish setup.

In a test of their resources they will be without Bundee Aki, the only Connacht player named in Andy Farrell’s starting XV, and also Dave Heffernan, Finlay Bealham and Ultan Dillane who are on the bench. And although halfbacks Jack Carty and Kieran Marmion, and lock Quinn Roux, with a shoulder injury, miss out, they remain unavailable to Friend while in the Irish setup.

As a result Connacht’s second row resources have been reduced to one with Gavin Thornbury being the only fit lock available. Both Cillian Gallagher and Niall Murray are recovering from recent surgeries, while Óisín Dowling, who has yet to feature since moving to Connacht, is still unavailable with a back injury.

“There are plenty of obstacles being thrown in everyone’s way during this whole period and this is another one for us,” says Friend.

“It is a big stress point, so we will make do. We are having conversations with the IRFU [regarding a medical joker] at the minute and waiting to get some finality on that.”

Tipped to move into the second row is Eoghan Masterson, who played in that position at under-age level, while Conor Fitzgerald will be handed the number 10 jersey. Although he came off the bench for Carty against Cardiff, his playing time has been limited since suffering an ankle injury in January, and then a concussion in the August Pro14 clash with Munster at the Aviva.

“Edinburgh have not had a good start [this season], but we haven’t won over there since I have been here, and it’s something we’d like to break this weekend.

“They are a quality side, topped our pool last year, and I think the squad they have built is very good. We copped a side last year that had Scottish players missing as well, but they put five tries on us. So we are not going there thinking this is a weakened Edinburgh side. We are going there knowing it’s an Edinburgh side in Murrayfield and we will need to be very good to beat them.”