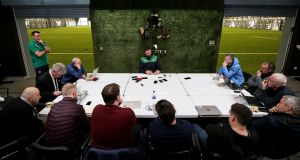 Andy Farrell has confirmed the door is not closed on those frontline names such as Rob Kearney and Jack Carty who were omitted from the first 45-man get-together under his watch at the Irish squad’s new base in Sports Campus Ireland.

Speaking to the media for the first time since succeeding Joe Schmidt as head coach, Farrell made it clear that he envisaged players who were not named in this squad making the Six Nations cut.

“As you can see this squad was based on form and we can’t include everyone in the camp,” said Farrell. “So we had to make a decision somewhere along the line. I’ve made it very clear to all the boys who’ve been in camp here over the last 24 hours that certainly this isn’t selection for the Six Nations.

“I’ve made it very clear to them what it is going to take for them to get selected. I’ve spoken to Rob but also other players who are not here and told them we will be watching them over this Christmas period.

“There are some big games in Ireland and then all the big games in Europe during January. It’s a big time for all the players and hopefully we will be picking a squad in January that is brimming with form.

“Form has to be at the forefront of selection. It’s not everything. You obviously look at what players will bring to the squad in terms of what they will add. Is what they have going to make the team play better?

“We want people sticking their heads above the parapet and saying, “please pick me?” That’s what we want to see over the next four or five weeks and I’m looking forward to watching that.”

The composition of the 45-man squad, featuring a dozen players not even in the expanded 45-man World Cup training squad at the start of pre-season, including eight new caps, also featured recalls for several of those who missed out on Japan, such as Devin Toner.

All of which pointedly suggested the beginning of a new order also contained a clean slate, and significantly this 24-hour get-together was described as a mid-season ‘stocktake’ rather than a squad session per se, and Farrell re-iterated: “I’m sure players who are not here this weekend will be in the squad but we’ll see. We can’t pick 45 anyway. Maybe there are players that you would expect to get picked, who have already been in this camp, who may not get picked the next time.

“I’ve said to the boys leaving now that we need to be ready when we come into camp the next time. We’ve been watching the form over the last four or five weeks. But it’s not a line that is drawn and everyone is on it.

“I’ve explained to them that it is not about being just one of four or five but you have to stand out, you’ve got to make it clear and obvious to everyone that you’re desperate to be in the squad.

“There are people who’ve trained over the last 24 hours and they’ll take stock of those words and hopefully help with their performances for the provinces over the next month. And some of them may fall off the wayside as well. But we’ll assess it as we go.”

Shamrock Rovers to meet Cork in FAI Cup second round