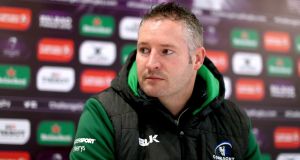 Connacht forwards coach Jimmy Duffy: “After their loss at the weekend, they will be gunning for us, so it’s going to be a competitive fixture.” Photograph: James Crombie/Inpho

A decade ago, some 1,200 supporters attended Glasgow’s first home game of the season against Connacht; yesterday 2,000 turned up to watch the Warriors train.

This tweet from Glasgow is indicative of the growing army of supporters behind a Warriors outfit leading the Pro14’s Conference A, and when these two sides meet again on Friday evening at the opposite end of the season, it would appear little has changed in the intervening years.

The result that day was 16-15 in favour of the hosts, and Connacht are once again expecting a tight game, particularly in the aftermath of Saturday’s 39-10 loss to Ospreys in Liberty Stadium.

Despite little to play for but pride, Connacht’s forward coach Jimmy Duffy says the mindset remains to win.

“We are preparing to try to beat Glasgow at the weekend. It will be a huge challenge, and after their loss at the weekend, they will be gunning for us, so it’s going to be a competitive fixture.

“We have been within range of a lot of teams this year which shows we are competitive, but we are are looking for continuous improvement, and that is the driving factor. We need to express ourselves and realise our potential.”

Duffy says Connacht need to take the positives from this season, particularly the introduction of a some young players, such as Peter Robb last weekend.

“You can’t buy experience, and that is what we are really driving at the minute. So to play in that pressure cooker environment against players of that calibre in Glasgow is what it is about.”

Duffy accepts expectations have not been met since winning the Pro12 trophy two seasons ago.

“In the last couple of years the expectation has been very high, but we have had players leave the club, players come into the club, a number of young guys coming through, so it is evolving. We had had never been in that position before, never won a trophy, or transitioned out so many players; never had a pre-season with seven out on international duty.

“That was a massive learning for us, and I believe we will be the stronger for it. It will take some time, and I can understand supporters may be frustrated, but I think people have to see what is coming, where we are going, and some of the performances we have put together.”

Injuries from Connacht’s loss in Wales include Seán O’Brien, who is following HIA protocols and is an unlikely to travel to Scotland, while fullback Tiernan O’Halloran will continue to be monitored this week for a foot injury.