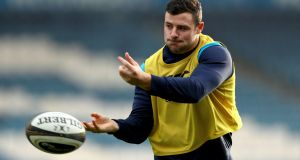 Robbie Henshaw took part in the captain’s run on Friday and also warmed up with Leinster on Saturday before their doomed Pro14 league match with Benetton Treviso. Photograph: James Crombie/Inpho

Leinster have signalled that Robbie Henshaw could be fit enough to play some part in their European Champions Cup semi-final against Scarlets next weekend.

Henshaw took part in the captain’s run on Friday and also warmed up with Leinster on Saturday before their doomed Pro14 league match with Benetton Treviso.

The Irish and Leinster centre is expected to train with the squad this week ahead of Saturday’s semi-final in Aviva Stadium.

The 24-year-old injured his shoulder scoring a try for Ireland against Italy in the Six Nations Championship. Intercepting Italian number eight Sergio Parisse’s pass to Tommaso Allan, Henshaw raced 50 metres to touch down.

That was to prove a bittersweet moment for the player and country, as he suffered his tournament-ending injury in the grounding and played no further part in Ireland’s Grand Slam win.

“Yeah, as you saw he [Henshaw] was running around there, so he’s getting closer,” said a non-committal coach Leo Cullen after Saturday’s defeat in the RDS.

The idea is to have Henshaw train more intensively this week as front-line players return and Leinster regroup after losing to the Italian side for only the second time.

“Exactly, yeah, that’s the hope,” added Cullen. “It was good to get him back for the match day warm-up. He did a good bit of training this week. He’s getting closer.”

Less positive news again surrounds backrow Sean O’Brien, who made his comeback from a shoulder injury but did not finish the game on Saturday.

A rather forlorn figure sat in the stands after departing for Peadar Timmins 41 minutes into the match, again with a shoulder issue.

O’Brien played his first comeback game against Scarlets last month after undergoing minor hip surgery in January. But the 31-year-old was forced out of that game after 27 minutes with a shoulder injury. O’Brien was hit hard in contact and initially played on before leaving the field.

“Yeah, we’re just trying to manage Sean coming back,” said Cullen. “He’s a little bit sore around his shoulder, so we just wanted to manage him. The aim was to get through 40 [minutes], see how he was at half-time and really make a call at that stage and that’s what we did. He’s okay, good to get through that 40 minutes.”

Rory O’Loughlin also had a knock to the head and will go through the return-to-play protocols, while scrumhalf Luke McGrath is touch and go as to whether he will have recovered in time from an ankle injury. Rhys Ruddock (hamstring) and Jack Conan (knee) are both hoping to train this week.

Munster coach Johann van Graan emphasised the importance of the squad during Munster’s two-week bubble in South Africa. After their European Champions Cup quarter-final win over Toulon, the South African coach made 10 changes and then nine changes with more expected this week facing into Bordeaux and Racing 92 next weekend.

Simon Zebo and Darren Sweetnam carried knocks into the mini tour and were unavailable for the first clash against Southern Kings. But both started against Cheetahs with Zebo leaving on 48 minutes for Ian Keatley.

Dan Goggin also took a knock as did Jack O’Donoghue, while scrumhalf James Hart was injured before the break giving license for Conor Murray to come in to play a Roy of the Rovers cameo.

Van Graan had not planned on giving the Irish scrumhalf so much game time as he did. But Murray scored a try within 30 seconds of arrival, putting the ball into a scrum, gathering it and charging over the line from close range.

He then landed a 55-metre penalty 14 minutes from the end for a 19-17 win before Munster weathered a late onslaught from Cheetahs.

Delighted van Graan returns with two wins, which only Glasgow have managed to do in South Africa this season and also nine point from a possible 10.

While Scarlets mull over their spectacular collapse to Edinburgh in Murrayfield, they will do so knowing that most of their front-line players did not participate. Coach Wayne Pivac made 13 changes to the side that beat Glasgow 26-8 last week and paid the price, shipping eight tries for 52-14.

“I guess that’s what you get when you put a group of players together and you have a couple of training runs,” said a stoic Pivac knowing he can pick from a fresh group this week including Leigh Halfpenny, Scott Williams, Rhys Patchell and Tadhg Beirne.

Elsewhere, a Racing 92 side that had a number of front-line players involved in their crucial Top 14 match against Toulouse came away 42-27 losers on Sunday.

1 Pete Sampras: The forgotten great with the best serve in the business
2 Super Rugby AU offers glimpse of rugby’s future if law changes are adopted
3 Cam Newton broke the mould: Can his flame be rekindled at the Patriots?
4 John O’Sullivan: IRFU must recognise vital role of clubs in rugby's return
5 Tuilagi case shows England’s home-based clause is out of date
Real news has value SUBSCRIBE