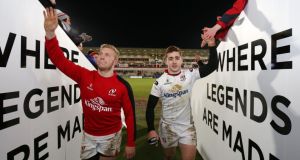 The Ulster and Ireland outhalf Paddy Jackson, who was acquitted of rape last month, is close to a move to the French club Clermont for next season after his contract was revoked.

His team-mate Stuart Olding also had his contact revoked by Ulster Rugby and the IRFU.

The decision followed a review by the IRFU and Ulster after Jackson and Olding were found not guilty last month of raping the same woman at a party at Jackson’s south Belfast home in June 2016.

In a joint statement issued on Saturday, the IRFU and Ulster Rugby said the decision to end the players’ contracts was based on the two organisations’ responsibility and commitment to the game’s core values.

“Following a review, conducted in the aftermath of recent court proceedings, the Irish Rugby Football Union and Ulster Rugby have revoked the contracts of Patrick Jackson and Stuart Olding with immediate effect,” it said.

Jackson and Olding were acquitted of rape charges following a nine-week trial at Belfast Crown Court last month. Jackson was also found not guilty of sexual assault. But text messages disrespectful and derogatory of women that Jackson and Olding sent in a WhatsApp group, and that were disclosed during the trial, led to calls for the IRFU and Ulster to sever their ties with the two players.

Protests organised by Belfast Feminist Network were held outside Kingspan Stadium, in south Belfast, before Ulster’s match against Ospreys on Friday night. The Ulster and IRFU statement outlining the revocation of the players’ contracts were released at 11am the next day.

Both players were under contract with Ulster and the IRFU until June 2019, but their contracts would have included a clause about bringing the game into disrepute. They both issued statements on Saturday expressing regret at the decision to end their contracts.

The decision by the province and union appeared to leave the careers of the player in a limbo. But it has been reported Jackson has made contact with the French club with a view to securing a deal to play there from next season. Clermont is a multinational club but has no Irish players on the current roster.

Exeter Chiefs, who play in the Aviva Premiership, rejected reports Olding would join the club.

Former Ireland coach Declan Kidney refused to comment when asked if London Irish would be interested in signing Jackson or Olding.

“I know one of those individuals well obviously and I wouldn’t like to comment on anything to do with that case at the moment,” said Kidney.

“I don’t think it’s appropriate, I think there’s enough of a media frenzy rather than me adding anything to it.”

Jackson and Olding are understood to have received undisclosed severance payments from the IRFU.

In the joint statement the IRFU also outlined its commitment to review policies on the education of players. “It has been agreed, as part of this commitment, to conduct an in-depth review of existing structures and educational programmes, within the game in Ireland, to ensure the importance of these core values is clearly understood, supported and practised at every level of the game.”

The Ulster player Craig Gilroy, who had no involvement in the incident that led to the trial, also received a lesser sanction, for sending an explicit message to the WhatsApp group.

He has been suspended by Ulster rugby until April 26th.