Ulster make four changes for visit of Ospreys to Belfast 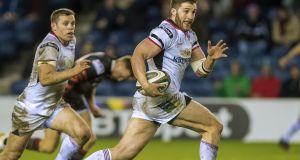 They’ll look to build on last weekend’s impressive win away to Edinburgh as they aim to regain third in conference B and a spot in the Pro14 playoffs.

Props Callum Black and Ross Kane are given a starting spot either side of captain Rory Best in the frontrow.

Kieran Treadwell is drafted in to partner Iain Henderson, who touched down late on for the bonus point try last week, in the engine room.

In the backrow, Sean Reidy comes into the side at number eight, with Jean Deysel switching to openside flanker and Matthew Rea continuing at blindside.

The backline, which contributed 27 of the 32 points against Edinburgh, remains in situ.

John Cooney and Johnny McPhillips continue their halfback partnership, while the midfield pairing of Stuart McCloskey and Darren Cave, who contributed so effectively in both attack and defence at Murrayfield, is retained.

Despite being withdrawn due to a back injury last time out, Louis Ludik has recovered to take his place on the right wing, with Jacob Stockdale on the left and fullback Charles Piutau completing the back three.

Tight-head prop Tom O’Toole, who impressed on his debut outing last week, is in line for his second cap from the bench, while Tommy Bowe will also be hoping to be called upon against the club with whom he enjoyed a four-year spell.

Meanwhile Cave has put pen to paper on a contract extension that will see him remain at Kingspan Stadium until at least the summer of 2019.

Cave is a graduate of the Ulster academy and having made his senior debut in 2007 he is currently the province’s’s third most-capped player - with 208 appearances and 44 tries.

The 31-year-old also has 11 international caps to his name and was a member of Ireland’s 2015 World Cup squad. Commenting on his new deal, Cave said:

“I’m really pleased to be staying on for another season. This month marks 11 years since I earned my first Ulster cap and I still feel that I have much more to give.

“We have a lot of work to do but the guys are committed to improving as individuals and as a collective. Hopefully we can finish this season strongly and then bring that through to the new campaign.”

Shamrock Rovers battle back at the Brandywell to go six clear 20:42
Liverpool to sign Olympiakos left back Kostas Tsimikas 20:06
Andy Sullivan fights back tears as he wins English Championship 19:34
Celtic drop their first points in quest for 10-in-a-row 18:58
Ben Stokes to miss rest of Pakistan series due to family reasons 17:09
Here is your handy guide to sport on television this week