O’Brien and Larmour return for Leinster against Treviso 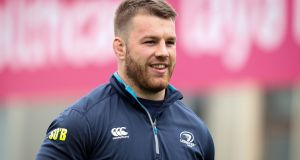 Leinster’s Sean O’Brien: “He is a great voice defensively in the line because he’s so strong in around that ruck area.” Photograph: Oisin Keniry/Inpho

The presence following injuries of Sean O’Brien and Jordan Larmour and the selection of Joey Carbery in his first start at outhalf for Leinster this season provides a piquant backdrop to this Guinness Pro 14 fixture.

O’Brien has recovered from hip and shoulder issues that has blighted his season of late, while Larmour is fit again following a leg injury. Both are now afforded an opportunity to press selection claims for next Saturday’s Champions Cup semi-final against the Scarlets at the Aviva stadium.

Leinster head coach Leo Cullen said: “Sean has worked incredibly hard to get back originally from his hip [problem] to play against Scarlets and then got the bang on his shoulder in that game. It took a little bit longer than we all would have liked, but he’s in good spirits now. He’s a great boost back to have back at this stage of the season.

“He is a great voice in the dressing-room. He is a great voice defensively in the line because he’s so strong in around that ruck area. He gives us really strong defensive presence. Then, on the other side of the game, it is just the intent with which he carries and his presence in all the physical components of the game. Hopefully we’ll see plenty of that.”

If O’Brien can prove his fitness it would be a significant fillip going into the Scarlets match.

Cullen did confirm that Rhys Ruddock (hamstring) and Jack Conan (knee) were expected to train next week, but that scrumhalf Luke McGrath (ankle) faces a race to be fit in time for the European match.

Cullen said: “[He’s] making steady progress. He hasn’t been reintegrated into rugby training yet, but hopefully [will be by] the start of next week. We’ll see how he is. He hasn’t been on the pitch as of yet, so he’s touch and go for next week.”

Carbery gets a chance to hone his game management skills to supplement his celebrated attacking brio. Like the majority of those at RDS on Saturday night, Cullen is looking forward to watching the 22-year-old grasp the opportunity. “He is such a naturally talented footballer. It’s that balance between managing the game and putting his own creative stamp on the game.

“Just go out and enjoy doing what he does, that’s the big thing for us. There’s enough support around him. Noel gives good voice outside him and Rory as well. Joey and Jamison have had a good relationship from day one when Jamison arrived. Hopefully the forwards can deliver a good platform which makes their life a lot easier.”