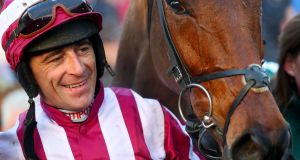 The Turf Club’s chief executive Denis Egan has said fixed penalties under the rule which saw Davy Russell cautioned by a Referrals Committee hearing on Saturday would be very hard to implement.

Last month Shane Foley was suspended for seven days under Rule 272(i) which deals with conduct prejudicial to the integrity, proper conduct or good reputation of racing after twice striking an unruly mount with his whip prior to a race at Fairyhouse. Foley’s penalty was reduced to five days on appeal.

On Saturday, Russell was merely cautioned by a three-man Referrals panel after also being found in breach of Rule 272(i) due to punching Kings Dolly in the head before her run in a maiden hurdle at Tramore. Egan insisted the two scenarios were different and that the case involving Russell was unprecedented.

“The panel were aware of the Shane Foley penalty and asked for guidelines. We never had to contend with a case like Davy’s before. But we have had situations like Shane Foley’s before and the penalty he got was consistent with those,” Egan said. “They are different cases and the committee interpreted what happened. It’s very hard to have fixed penalties for something which is always going to have as many variations as Rule 272 breaches do have,” he added.

In other news at the Curragh on Sunday, Colm O’Donoghue enjoyed an easy success with St Brelades Bay in the six-furlong handicap. The classic-winning jockey travels to Roscommon on Monday for two rides for Jessica Harrington, including the newcomer Still Standing in a juvenile maiden.

Downpatrick host a jumps card which sees Friday’s Killarney winner Presenting Julio try to defy a 6lb penalty. The handicap chase trip may be shorter than ideal but his jumping looked notably good last week and he can confirm form with William Du Berlais.