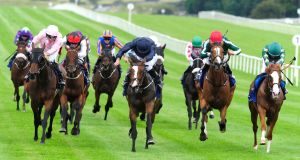 The Curragh’s final card prior to its “Irish Champions Weekend” date in a fortnight inevitably contained a sense of prelude but Aidan O’Brien continued his relentless path towards Irish racing’s showpiece event with a Sunday hat-trick.

If Saxon Warrior looks to have the world at his feet after a striking debut in the juvenile maiden, then Rain Goddess finally got her place in the sun with a gutsy success in the Group Three Snow Fairy Stakes.

The Irish Oaks runner-up is now as low as 8-1 for the Breeders Cup Filly & Mare at Del Mar in November although her trainer’s immediate priorities are much closer to home.

The Leopardstown leg of O’Brien’s champions weekend team looks set to be headed by Churchill in the Irish Champion with Winter already odds on for the Matron Stakes.

Order Of Sts George is likely to be the Ballydoyle standardbearer in the Irish Leger with a plethora of options open among O’Brien’s hugely powerful juvenile team for the National and Moyglare Stakes.

US Navy Flag underlined that strength when streaking to a six-length victory in Sunday’s Group Three Plusvital Round Tower Stakes after which his trainer indicated his enigmatic superstar sprinter Caravaggio could also be part of Ballydoyle’s champions weekend squad.

"He could come here for champions weekend and he’s been going very well at home,” said O’Brien.

Caravaggio’s sole entry is in the Group Two Flying Five and it would mean a first start at the minimum trip for the colt since winning the Marble Hill as a juvenile. After a brilliant Royal Ascot victory, Caravaggio has been beaten in both the July Cup and Deauville’s Prix Maurice De Gheest.

O’Brien anticipated last Wednesday’s Juddmonte International second to Ulysses will bring Churchill “forward” for his next start and the dual-Guineas winner is a general 9-4 favourite for the Irish Champion.

However, the danger of betting short was advertised yet again on Sunday when O’Brien’s 2-5 favourite Ballet Shoes came up five lengths short of Liquid Amber in the Flame Of Tara Stakes.

Carrying the Ulysses colours, Willie McCreery’s 10-1 winner earned 25-1 quotes for next year’s 1,000 Guineas and her local trainer indicated she could be put away for the rest of this season.

McCreery famously won the Matron at the first champions weekend in 2014 and knows better than most how gingerly these big-race hopes have to tread over the coming couple of weeks.

For the Curragh authorities, though, champions weekend will close a tumultuous 2017 season at HQ where the decision to stage the Derby with a restricted 6,000 crowd limit drew widespread criticism.

Only 5,412 eventually attended the Derby but plans to add another thousand people to the capacity in the infield on champions weekend under a “Family Fun” banner are advanced.

"We are linking up with Fossetts to have a big-top circus able to host up to 800 people. We will have other marquees with other family entertainment too,” said Curragh chief executive Derek McGrath. “It’s something we want to have a look at not just this year but into the future. We want to help the atmosphere for all within the new Curragh,” he added.

There was nothing wrong with the atmosphere on Sunday when Curragh-based Japanese trainer Takashi Kodama secured the greatest win of his career with the 25-1 Elusive Time landing the €100,000 Tote Irish Cambridgeshire.

“He’s nine-years-old and I was thinking of retiring him at the end of the season but he seems to be improving,” said Kodama who has just half a dozen horses in his string.