Order Of St George eases to victory on Curragh return 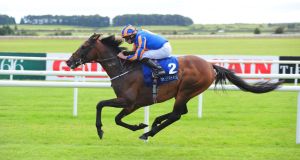 Order of St George eased to victory at the Curragh under Ryan Moore. Photograph: PA

Order Of St George won the Comer Group International Irish St Leger Trial for the third year running with an authoritative performance at the Curragh.

Returning from a break since being touched off by Big Orange in the Ascot Gold Cup, the Aidan O’Brien-trained five-year-old showed he was well on target for next month’s Irish St Leger as he won with the minimum of fuss.

Twilight Payment and Renneti cut out the early pace but Ryan Moore was simply biding his time on the 1-2 favourite.

Order Of St George kicked on a furlong and a half out and went on to win by four and three-quarter lengths from Rekindling.

Moore said: “It was nice ground and the race suited him well.

“He’s a big horse and likes that bit of an ease.

“It was a good race but he’s a high-class horse and was third in the Arc.”