Jockeys urge ‘no rush to judgement’ over Davy Russell 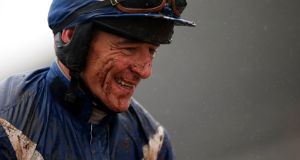 Davy Russell: “The situation with Kings Dolly was an ordinary enough situation and I didn’t do anything out of the ordinary.” Photograph: Alan Crowhurst/Getty

The Irish Jockeys Association has urged there be no “rush to judgement” until Davy Russell has had an opportunity to explain what happened at Tramore on Friday when appearing to punch his mount, Kings Dolly, in the head before a race.

The former champion jockey has welcomed the opportunity to talk to the Turf Club who have launched a retrospective investigation into an incident that wasn’t looked at on the night by racecourse stewards but which provoked plentiful comment on social media.

Russell looked to strike the Roger McGrath-trained horse after she approached a show hurdle in the middle of the track prior to running in a handicap hurdle.

On Monday Russell said in a newspaper column that he couldn’t go into specifics about what happened but added: “The situation with Kings Dolly was an ordinary enough situation and I didn’t do anything out of the ordinary.

”I’m not sure everyone on social media quite understands how a thoroughbred racehorse handles at race time but I am happy to speak to the Turf Club about this. I ride every horse to win, no matter what, and would never do anything to hamper its chances.”

The incident has subsequently attracted plenty mainstream media attention and the Turf Club’s  chief executive Denis Egan has indicated racing’s regulatory body will decide later this week, after talking to Russell, if the jockey has a case to answer under the rules of racing.

Last month the flat jockey Shane Foley was suspended for seven days under the Turf Club’s Rule 272 after striking an unruly mount with his whip before a race at Fairyhouse. The ban was subsequently reduced to five days after an appeal.

“We will have to see if he’s in breach of the rules of racing and decide whether or not to refer him on or if his explanation is accepted. We will decide that by the end of the week,” Egan said.

Russell is one of Ireland’s most high-profile and popular jockeys with a big race CV that was added to earlier this month with a first success in the Galway Plate.

He has been embroiled in controversy in the past however and last September refused to take two mounts at Clonmel having earlier lost a race in the stewards room and been handed a 14 day ban for abusive conduct towards officials at the enquiry. Russell subsequently apologised for his behaviour.

Andrew Coonan, Secretary of the Irish Jockeys Association, said on Monday the Turf Club’s retrospective examination of what happened at Tramore is covered by their rules and that he had no issue with an investigation or how it originated.

“The Turf Club has the ability under its powers to look at this. In a situation where it becomes aware of certain information, for it not to investigate would be unrealistic.

“It’s fair and reasonable that they do so. But before any rush to judgement I think it is important that Davy Russell gets to explain his side of the story and to do so in the cold light of day,” Coonan said.

Russell is setting a rattling pace at the top of this season’s jump jockey’s championship with 43 winner – 14 clear of Ruby Walsh – and will have four rides for Gordon Elliott at Sligo on Tuesday evening where ground conditions are currently yielding.

Monday’s card at Roscommon less than 50 miles away was abandoned when 4mms of rain in the morning, and a forecast of more to come, forced officials to cancel.

“No one likes to see a meeting called off but to see one go on August 21st due to waterlogging is that bit different,” the Turf Club’s Denis Egan said.

The card has been rescheduled to next Monday.

Sligo’s jumps action is very different to York’s elite Group One action which begins on Wednesday with Aidan O’Brien pitching both Churchill and Cliffs Of Moher into a seven-runner Juddmonte International.

In comparison the Sligo card is mostly notable for two John Berry-trained veterans lining up over hurdles.

The 14-year-old Cootamundra, winner of the 2013 Troytown Chase, is topweight for the two mile handicap. He’s a year younger than his stable companion Give Us A Hand who lines up later on the card.