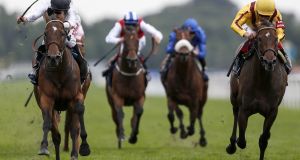 Ryan Moore is travelling to the Curragh’s Sunday action via New York on Saturday night where Idaho will attempt to finally land an elusive top-flight victory at Saratoga.

Last year’s Irish Derby runner-up has run in seven Group/Grade One races without success during his career yet boasts some high class form including finishing third to Enable and Ulysses in last month’s King George.

Now Aidan O’Brien’s colt lines up in the $1 million Sword Dancer Stakes on a prestigious Saratoga card containing half a dozen Grade One contests including a Travers Stakes containing all three winners of the USA’s Triple Crown races. Idaho is rated a 2-1 local favourite.

The mile and a half Sword Dancer is off at 9.49 Irish-time and Idaho will be joined in the seven-runner field by the French-trained Erupt. The latter won last year’s Canadian International when his European rival could only manage a disappointing fifth.

Should Idaho become the first Irish winner of the prestigious turf contest he will also provide O’Brien with a 15th Group/Grade One victory of 2017. The Irishman is 6-4 to beat Bobby Frankel’s world record of 25 top-flight wins in a calendar year.

O’Brien was out of luck in Friday’s Nunthorpe Stakes at York when Washington DC was out of the money. Marsha dramatically edged out the hot favourite Lady Aurelia on the line.

It left Frankie Dettori red-faced as the legendary jockey mistakenly celebrated passing the post only for Marsha’s rider Luke Morris to emerge best.

Moore is engaged for five O’Brien rides back at HQ which stages its final fixture prior to Irish Champions Weekend in a fortnight.

The Englishman could well pull off a Group Three hat-trick headed by Rain Goddess in the Snow Fairy Stakes – named after Moore’s 2010 Oaks heroine.

Rain Goddess had the thankless task of chasing home Enable in the Irish Oaks last month and drops three furlongs here. Her Pretty Polly second to Nezwaah though suggests that drop shouldn’t be an issue.

Ballet Shoes is hard to oppose in the Flame Of Tara Stakes and Roly Poly’s busy brother US Navy Flag looks to hold an edge in the Round Tower based on a fine fourth in the Phoenix Stakes. Moore can also fancy his chances in the opener on board Christopher Robin.

The most valuable Curragh contest however is the €100,000 Tote Irish Cambridgeshire where 27 line up.

Dermot Weld’s Calumet Farm-owned Foxtrot Tango tops the weights but the same connections also have So You Thought at the other end of the scale.

Leigh Roche’s mount bucked the general trend in Weld’s virus-hit first half of the season when managing to win a maiden at Navan. On his last start he found only the smart Jet Streaming too good at Galway.

The resurgence in Weld’s fortunes since Galway however has been unmistakable and first-time blinkers are put on So You Thought as well.

Only one three year old has won this huge handicap in the last decade but So You Thought with Leigh Roche doing 8.6 could buck that trend.

Brendan Duke’s Galway winner Warm The Voice tops the ratings in Sunday’s finale and the clash between him and the Gowran winner Masucci could be good.

It’s interesting that both are taking their chances in a Nursery rather than stepping up into a conditions event and preference is for the Ger Lyons runner.