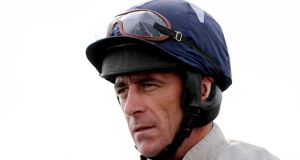 Davy Russell has received a caution for an incident at Tramore in which he appeared to strike his mount. Photograph: James Crombie/Inpho

Former champion jockey Davy Russell has been cautioned by a Turf Club Referrals Committee hearing in Killarney on Saturday after being judged to be in breach of Rule 272 in an incident at Tramore eight days ago when he appeared to punch a horse in the head.

Russell appeared to strike Kings Dolly after approaching a ‘show’ obstacle prior to the horse running in a handicap hurdle.

It provoked plenty reaction when a video of the incident appeared on social media but it wasn’t picked up on by the raceday stewards. The Turf Club subsequently launched an investigation and Russell appeared before the Referrals Committee at noon on Saturday.

Full details of the hearing won’t be released until Monday but a Turf Club spokesman has confirmed Russell was found in breach of Rule 272(1) relating to conduct or behaviour which is prejudicial to the integrity, proper conduct or good reputation of horse racing.

He added that the “penalty issued was a caution.”

Russell said earlier in the week that “the incident with Kings Dolly was an ordinary enough situation and I didn’t do anything out of the ordinary. I’m not sure everyone on social media understands how a thoroughbred racehorse handles at race time.”

After the hearing, the Turf Club’s chief executive Denis Egan told the ‘Attheraces’ channel the hearing took about 25 minutes.

“Davy gave very fair evidence. He set out what had happened on the way down to the hurdle which is that he felt the horse was not paying attention. They got to the hurdle and he said if he had his life to live over again he would have let her jump the hurdle and dealt with the consequences of that.

“He said he couldn’t use his whip because that’s also in breach of the rules so to get the horse to concentrate he did what he did which was to strike the horse on the soft point, just behind the head, with his fist.

“He accepted he was totally wrong and he’s very remorseful for what he did. I’ve absolutely no doubt he won’t do it again,” he said.

Egan added that the Committee panel were very experienced and said: “In this case, based on the evidence given, they felt a caution was the appropriate penalty.”

The Turf Club chief executive conceded the regulatory body could have dealt with the matter a little more quickly but logistically time was needed, including to speak to Russell and King’s Dolly’s trainer Roger McGrath who confirmed “there were no ill-effects on the mare’s condition.”

Egan added that horse welfare is a priority for the Turf Club and said: “Davy has learned his lesson and won’t do anything similar again.”