Barry Geraghty out of action after heavy fall at Killarney 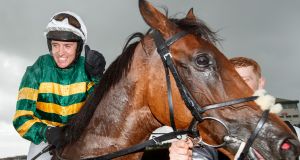 Barry Geraghty is likely to be out of action for a week following a bad fall at Killarney on Saturday.

The jump jockey took a tumble when his mount Cook Islands was brought down by Wonderoftheworld at the final flight in the Irish Stallion Farms EBF Novice Hurdle.

“Barry is very sore. Nothing is broken. He has soft tissue injuries to his back and right shoulder, so he’ll probably take a week off,” said Irish Turf Club senior medical officer Dr Adrian McGoldrick.

It is another blow for Geraghty, who only returned from a spell on the sidelines at the Galway Festival after being off since April with a broken arm sustained in a fall from Minella Foru in the Irish Grand National at Fairyhouse.

The retained jockey to owner JP McManus was forced out of this year’s Cheltenham Festival when suffering lung and rib injuries in a fall at Kempton in February. He also broke his other arm in a fall at Market Rasen in July 2016.