The rise and fall of Mary Bacon, the ‘Klansman’s Jane Fonda’ 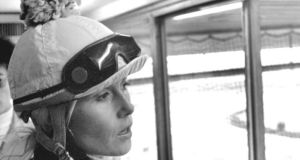 The ballad of Mary Bacon. On June 5th, 1969, at the age of 21, just 12 weeks after giving birth to her first child, she rode her first winner as a professional jockey at the Finger Lakes Race Track in upstate New York. No woman had ever won at the venue before. How could they have? Just three months had passed since the pioneering Diane Crump pushed open the door for female jockeys at a race in Florida. If Crump broke down the barrier, Bacon made an immediate mark too.

“Why do you wear flowered underwear that everybody can see through your white riding pants?” asked one journalist.

“When I’m on the lead,” Bacon replied, “it gives the boys back there something to look at.”

Competing like a woman determined to be more than a secondary footnote in the sport’s history, she became the first female to notch up 100 winners. On the way to that milestone, her legend quickly gathered pace. A five foot four, 94lbs waif, she was photogenic, quick-witted and fed reporters a steady supply of memorable quotes.

“Girls who are short with a squatty waist and a wide rear don’t fit the saddle,” said Bacon, whose petition to compete without a bra was denied by authorities fearful she’d distract competitors. “And those with big busts can’t get down on the neck of the horse comfortably. It’s better if you don’t have a lot hanging down.”

There were more talented women riders but none whose outsized personality transcended the sport in quite the same way. It helped that she invented a lurid backstory about being the child of a carny father and hillbilly mother who learned to ride while in Juvie and subsequently worked as a stripper and go-go dancer to fund her equine dream. That her parents actually paid for her to spend a year at an expensive riding school in England only emerged later.

By the mid-seventies, she was earning $3,000 a week between winnings and endorsements, and graced the cover of Newsweek magazine for a story about female pioneers in sport. She had also posed for a semi-nude spread in Playboy, starred in a television commercial for Dutch Masters cigars, and been earmarked by Revlon as the new face of Charley cosmetics, a perfect gig for someone who liked to ride in full make-up, replete with false eyelashes and impeccably painted nails.

More often than not, Bacon dressed for races in the women’s toilets or in the course’s first aid facility, where once she had to change next to the still-fresh corpse of an elderly punter who had just died of a heart attack. Competing against her then husband and fellow jockey Johnny Bacon at Detroit Race Track one time, the couple had a dust-up during a race. Stewards decided she had tried to run him into the rails and banned her for five days.

“That’s nothing,” she told the press afterwards. “I gave him five nights!”

At the peak of her fame, she was riding at the Fairgrounds in New Orleans in April, 1975 when she hooked up with David Duke. The same odious character who featured prominently at the white supremacist rally in Charlottesville, Virginia last weekend, Duke was then national director of the Ku Klux Klan. Already on the government’s radar, FBI agents were watching his apartment when they saw Bacon emerge the next morning.

We are not just a bunch of illiterate Southern nigger-killers

That evening, the most famous female jockey in America accompanied her new beau to a Klan rally at a school gym in Walker, Louisiana. A photographer present thought that he recognized Bacon hanging around Duke and the KKK wizards as a country and western band stoked up the crowd. His suspicions were confirmed when Bacon was subsequently introduced as a special celebrity guest speaker. She took the mike and delivered a speech that included the following snippet.

“We are not just a bunch of illiterate Southern nigger-killers,” she said. “We are good, white, Christian people working for a white America. When one of your wives or one of your sisters gets raped by a nigger, maybe you’ll get smart and join the Klan.”

Her cameo was captured by a local television crew and, as soon as that quote hit the news wires, Bacon’s career went into free-fall. The Wall Street Journal described her as “The Klansman’s Jane Fonda”. Over the next year, she had 80 per cent fewer rides as trainers sought to distance themselves from somebody with such toxic views. Her attempts to row back the comments (“I’m no racist - my record collection is all Motown!”) made matters much worse.

“Once I was called the Bunny Jockey because of Playboy,” she said, far too glibly, “now I’ll be known as the one in the white sheets.”

The endorsement deals were ripped up and, over the next decade, Bacon struggled even to get work as an exercise rider. Sixteen years after her star turn at the Klan gathering, she booked into a motel in Austin, Texas. Then she went to a pawn shop and bought a gun and some ammo. A housekeeping maid discovered her the next morning, bleeding from a bullet wound to the head. After she died 16 days later, her ashes were brought to Belmont Park in New York and sprinkled on the grave of Ruffian, perhaps the greatest thoroughbred filly the race game had ever seen.

The ballad of Mary Bacon.

1 Gerry Thornley: Wild reactions to this Ireland team as fickle as the wind
2 Cheltenham keeping a watching brief on coronavirus
3 Dan Tuohy explains ‘rotten to the core’ comments
4 R&A call for ‘common ground’ on golf’s distance debate
5 England and Eddie Jones at the vanguard of rugby’s hybrid era
Real news has value SUBSCRIBE