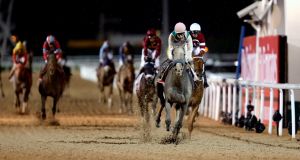 Arrogate had to show courage as well as class to win the $10 million Dubai World Cup in what was a sensational performance at Meydan.

Sent off the long odds-on favourite after wins in the Breeders’ Cup Classic and Pegasus World Cup Invitational, Bob Baffert’s four-year-old appeared to have lost all chance with a slow start.

But jockey Mike Smith showed all his experience and did not panic, weaving in and out of the field as he gradually made up ground.

Rounding the turn for home he was making up many lengths, but Gun Runner appeared to have stolen a march.

Arrogate found another gear, though, and he bounded clear to give Baffert a third win in the race.

Baffert said: “When he missed the break, I gave him no chance at all.

“I was so mad at myself thinking I shouldn’t have brought him – that’s the greatest horse I’ve ever seen run, it’s unbelievable, I can’t believe he won. That is a great horse.

“Mike did a great job, he didn’t panic. When he turned for home I said ‘If he wins he’s the greatest since Secretariat’.”

Smith said: “When I missed the break I immediately thought of Zenyatta. I thought ‘I’ve got so much confidence in this horse I’m going to ride him like Zenyatta’ and it paid off.

“I missed the break completely because he’s used to having a man in the gate with him, but things happen for a reason and thank the Lord we got the job done.

“This horse can do anything, he can win in the lead, he can come from dead last, he hasn’t even taken a breath.

“I get a lot of the glory, but there’s a big team who deserve a lot of credit.”

Jack Hobbs will be aimed at races such as the Hardwicke Stakes and King George after running out a most impressive winner of the Dubai Sheema Classic.

Trained by John Gosden for Godolphin, the 2015 Irish Derby winner looked a cut above a host of other Group One winners.

Aidan O’Brien’s Highland Reel set out to make all, as is his wont, but William Buick was keen not to let Ryan Moore loose on the lead.

While everyone else was riding for all their worth, Buick was sat motionless before pressing the button down the straight and shooting clear.

Seventh Heaven ran a big race for O’Brien, staying on stoutly for second to suggest she is likely to be a tough mare to beat this year, while Postponed, the winner 12 months ago, has not quite looked the force of old so far this season but still finished third.

Gosden said: “When Godolphin bought into him they wanted to run him in this race and I said ‘as a five-year-old, not at four’.

“We had a quiet year last year, but his form at Ascot was rock solid [in the Champion Stakes].

“It was interesting Ryan stayed off the rail for the better ground, but that meant it was wide open in the straight and William was cool, just like he was when Dar Re Mi won this – he didn’t go straight away.

“He’s a lovely horse. He’s got semi-blinkers on, they’re only little, but in the Champion Stakes he spent the whole time dreaming.

“We’d had him out at 5am trying to get used to the lights, first time he was taken aback but he’s got used to it.

Looking to future plans, Gosden said: “With a horse like this, after they’ve run here you need to freshen them up and I would like to look at the Hardwicke Stakes at Ascot and then the King George, which are ideal races for him.

“I had supper with Sheikh Mohammed last night and he wants people to come here from all over the world and win races.”

Buick said: “Blinkers first-time and there’s a strong wind, so he was a little keen but he’s done it very well.

“He’s a classy horse, the blinkers probably have helped, John said earlier in the week he was in great shape and he was proven right.

He added: “With first-time blinkers the one thing I didn’t want him to do was over-race. He gave me a great feel throughout and was very impressive.”

O’Brien said of his two runners: “Highland Reel had quite an exacting year and this was his first run back on ground that wasn’t ideal for him.

“It’s very early in the season and I’m sure there’s be other days ahead, but there are no excuses.

“For the filly [Seventh Heaven] it was also her first run back and I was delighted with her, it sets her up nicely for the coming months.”

Seamie Heffernan said of Seventh Heaven: “On her first run of the year she has run a cracker. She’s a double Group One winner and I’m delighted with her.”

Andrea Atzeni said of the Roger Varian-trained Postponed: “The pace was a bit slow for my horse, which I was a little bit worried about in such a small field, and on that ground he didn’t find the gears that we all know he possesses.”