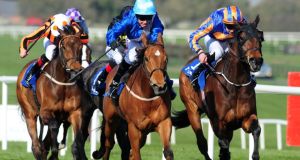 A potentially crucial test of the Turf Club’s controversial new ‘non-trier’ rules could come on Monday.

The connections of both Cloudy Morning and Theturnofthesun have appealed the penalties imposed on them at Gowran earlier this month when the horses finished second and third to General Principle in a Beginners Chase.

Just three finished and both horses were banned for 42 days each. Jockeys Andrew Lynch and Barry John Foley were suspended for five days and trainers Matthew Smith and Declan Queally were each fined €2,000.

They were the seventh penalties imposed since the Turf Club introduced its amended Rule 212 regulation which emphasises the need for jockeys to be seen to make every effort to achieve their best positions.

Lynch, a Cheltenham Festival-winning rider, who rode Turnofthesun, has said he was “shocked” at the penalties.

The extensively revised Rule 212 came into effect on January 21st. It includes a clause which states there is “an overall obligation on all persons who have any involvement with the running and riding of a horse, to ensure that the horse concerned runs on its merits and is also seen, to a reasonable and informed member of the racing public, to have been run on its merits.”

The 41-year-old Galway-born jockey had his first ever ride at the track in January 1992 and hadn’t been back at Naas since until teaming up with English trainer Mick Channon for the 8/1 winner.

“I looked it up before coming here and I rode a horse for Noel Meade on January 25th, 1992,” said Lee, the 2004 Grand National winner who has carved out a Group One-winning career on the flat since then.

“The ground is very holding but this filly has big old feet and she coped well,” added Lee of a filly who is part-owned by former trainer, David Wachman.

Keith Higgins becomes the latest Mayo stalwart to hang up his football boots 12:54
‘Don’t write me off yet’: Conor McGregor to fight on after Poirier knockout 11:35
Tony Finau shares the lead heading into last round in La Quinta 11:21
Sunday’s Thurles card called off due to snow 11:10
Conor McGregor stopped by Dustin Poirier in second round 06:33