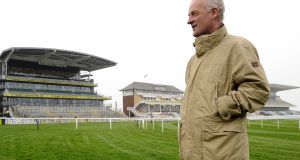 Trainer Willie Mullins says he will not be bringing a big squad to Aintree next month. Photograph: Getty Images

Willie Mullins has no plans to descend upon Aintree next week with an army of horses.

The County Carlow handler was last season well represented at the three-day meeting as he was embroiled with Paul Nicholls in a fascinating clash for the British trainers’ title.

But Mullins says he will revert to normal for Aintree: “I normally don’t have a big team at Aintree.

“Last year we were (going for the trainers’ title) but this year we are reverting to normal.

“We’ll run a couple in the National, Pleasant Company and Alelchi Inois.

“We could have a bumper horse and possibly something in the Aintree Hurdle.

“Footpad is maybe more Punchestown-bound. For Nichols Canyon, we are looking at Punchestown and the race in America (Calvin Houghland Iroquois) in May, in which he ran last year.

“I imagine the juveniles will be kept for Punchestown,” he told the Irish Independent.

Mullins reports his six Cheltenham Festival winners to have recovered well from their exertions, and issued a positive bulletin on Annie Power, who missed the big meeting due to injury.

He said: “They have come out of the Festival very well.

“Also Annie Power could run at Punchestown. We step up work in the next couple of weeks.

“Min is just OK, Annie is in better order.”

Mullins believes Yorkhill did enough in the JLT Novices’ Chase at the Festival to make him a worthy contender for next season’s Cheltenham Gold Cup.

The seven-year-old is unbeaten in three tries over fences and is already as low as 6-1 about winning the Gold Cup next March.

His trainer said: “Yorkhill is settling and he is jumping.

“That he can jump around Cheltenham and that his pedigree is a real old-fashioned chasing, one would tell me the progression would be the Gold Cup on that performance.

“He’s learning and maturing. This time next year he could be that (Gold Cup) direction.”