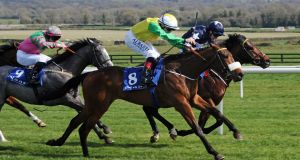 If Naas on Sunday was an unfamiliar stage for the start of Ireland’s 2017 flat season on turf it chimed with novel popularity for a code traditionally regarded as the rich man’s game.

Despite a record 19 Cheltenham winners, unease at how National Hunt racing increasingly appears to have turned into a closed shop for a tiny elite can be gauged by a perception that Ireland’s flat programme might provide more opportunity for smaller owners and trainers.

Admittedly, Aidan O’Brien getting off the mark for the year with a double, and Czabo landing the Group Three Park Express Stakes for English trainer Mick Channon didn’t scream “grassroots” on Sunday.

However, there will be easier options in the long season ahead, although the idea the flat might somehow make for easier pickings than National Hunt for those in the middle market was firmly rejected by Ger Lyons.

The Co Meath trainer saddled an opening-day double – including a 16/1 Irish Lincolnshire success with the veteran Brendan Brackan – continuing the 2016 form which saw him finish fourth in the championship table.

The ex-jockey also scored with a new recruit in Gymkhana and having begun his training career over jumps his opinion that there’s no racing revolution occurring in Ireland wants for nothing in credibility.

“When I decided to switch and concentrate on the flat I was told I was mad, that I couldn’t compete. Now it’s gone full circle. Now you can’t compete in National Hunt. That’s what they’re selling and it’s not true,” Lyons said.

“Success in racing is all about sourcing horses. That’s the secret. It’s the same now as it was 50 years ago, flat or jumps. And that’s what these guys are doing. I’m in awe of what Gordon Elliott has achieved.

“Instead of whinging about Michael O’Leary not spreading his horses around more, we should be celebrating these times. These things go in cycles. Michael O’Leary and JP [McManus] won’t be around forever. What’s going to happen then? Will the best horses stay in Ireland or will it be back to the days of selling them to England. People should enjoy it while they can,” said Lyons.

It’s still a radical shift that even a perception exists that the game popularly associated with sheikhs, royalty and global titans of the bloodstock game might allow more of a competitive chance for the ‘small man’.

It reflects a sector buoyed by huge international success in 2016 for Aidan O’Brien and Dermot Weld in particular. But the domestic scene remains hugely competitive, which makes Lyons’s remorseless rise into the top echelon of this country’s trainers all the more notable.

Brendan Brackan has been a stalwart in recent years and his trainer called him a “legend of a horse” after he won the €100,000 feature from the luckless Aussie Valentine, with Lyons’s apparent number one hope, Sea Wolf, in third.

“We fancied Sea Wolf but he got caught in the ground and you can’t beat class. This is a group horse in a handicap and I’m thrilled he’s won another big one,” said Lyons, whose 90-box yard is full and ready to go. “Whether it will be full in June, we’ll see. It’s about quality over quantity.”

Both of O’Brien’s winners were ridden by his daughter Ana and after Orderofthegarter landed the final maiden by 11 lengths, the champion trainer revealed his classic hopeful Caravaggio will be among a large team of horses working at Naas on Monday.

“Then we’ll look to run him in a seven-furlong race [Patton Stakes] at Dundalk,” he said.

Chris Hayes was also in double form, giving ‘Fozzy’ Stack a first winner under his own name with Gino Severini and also teaming up with veteran Kevin Prendergast for the first two-year-old winner of the season, Moonlight Bay.