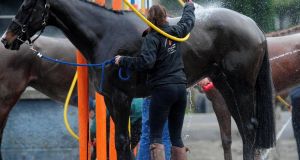 A horse is washed down after the Holycross Maiden Hurdle at Thurles Racecourse in Co Tipperary on Thursday. Photograph: PA Wire

With just over four weeks to go to the start of the Cheltenham Festival, horse racing in Britain was thrown into turmoil on Thursday after confirmation of an outbreak of equine influenza.

Three horses, who had been vaccinated for the highly contagious virus, as is required for all racehorses in training, tested positive for the flu at the stables of Grand National-winning trainer Donald McCain, in Cheshire.

The British Horseracing Authority (BHA) is now carrying out tests at more than 100 yards in Britain. It cancelled all of Thursday’s racing and has decided racing cannot resume in Britain until next Wednesday at the earliest.

“The disease can take up to three days before symptoms are visible, meaning it will take until Sunday at the earliest before the BHA can gather all the information required,” said a spokesman for British racing’s ruling body.

“This precautionary approach is intended to ensure we put the health of the horse population and control of the virus first and avoid any unnecessary risk that might come from returning to racing too quickly,” he added.

Racing will continue in Ireland after Horse Racing Ireland (HRI) and the Irish Horseracing Regulatory Board decided the disease-risk status had not changed here. Racing takes place at Dundalk on Friday night. No entries are being taken for British-based horses.

Fears that Irish runners that ran at the Ayr and Ludlow fixtures in which McCain horses appeared might be infected eased after all were put into isolation stables instead of returning to their home yards. HRI’s chief executive Brian Kavanagh said it was “of concern to us in Ireland that the English industry gets going again as quickly as possible”.