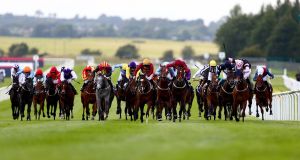 The looming shadow of Brexit has already had an impact on trade with bloodstock sales at public auction in Ireland falling by eight per cent last year.

That dip means gains secured in bloodstock sales in 2017 were reversed and Brexit has been identified as the major factor in the drop from €175.6 million to €161.5 million.

“While the market for Irish bred National Hunt horses made gains in 2018, and showed a three per cent increase, the 2018 sales cycle was a very challenging one for vendors, particularly those selling flat horses,” said Horse Racing Ireland’s chief executive Brian Kavanagh.

“It meant that the gains made in 2017 across the spectrum of sales were reversed with the uncertainty created by Brexit the biggest of a number of factors.”

He was commenting after HRI released its 2018 Irish Thoroughbred Industry Statistics. It saw a sharp rise in new owners last year while the number of horses in training also increased.

However, an early indication of Brexit’s potential impact came with the drop in bloodstock sales.

“In Brexit, with the uncertainty it has caused and the difficulties it has the potential to create, we are facing a formidable challenge,” Kavanagh said.

“The challenges in terms of movement of animals, customs and tariffs, and potential protectionism that Brexit could visit upon us, could have detrimental consequences.

“Throughout the Brexit process we have been working closely with our international racing partners, including in Britain and France, and politicians and officials in Dublin and in Brussels. We will continue to do so on behalf of the industry,” he added.

HRI estimates that up to 80 per cent of the Irish thoroughbred industry’s exports go to Britain.

Another notable statistical decline in 2018 came in Tote betting which was down 33.3 per cent to just €69.2 million. That included a 7.7 per cent drop in total on-course betting here to €10.7 million.

HRI blamed a decision by the Israeli government to ban betting last year as having a severe impact on Irish pools betting. A strategic review of Tote Ireland is currently taking place.

There was no stop to the apparently remorseless decline in on-course bookmaker betting, which dropped by 11 per cent last year to just €54.8 million.

The weekend’s racing focus is on the second renewal of the Dublin Racing Festival at Leopardstown, although the threat of freezing weather conditions means declarations for the Saturday programme will revert to a 24-hour stage on Friday.

It is a precautionary measure to allow flexibility in adjusting the race order if necessary and allows an extra 24 hours to review updated weather forecasts.

Sleet and even snow showers are possible for the Dublin area on Thursday with temperatures forecast to dip well below freezing overnight.

There was no change in the ground conditions at Leopardstown on Wednesday. The going on the chases course is good while it is good to yielding on the hurdles and bumper track.