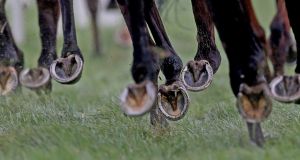 A minimum rating of 80 for Flat Group Ones and 130 for all non-novice Grade One chases and hurdles will apply from 2018. Photograph: Inpho.

The British Horseracing Authority has moved to stop apparent no-hopers running in Group One races by introducing a minimum official rating to run at the top level.

The ruling, which will come into force from next year, means no horse rated less than 80 will be able to run in Group Ones, although it does not apply to two-year-old races.

For any horse that does not have a rating, the BHA handicapper will have the discretion to allow the horse to run if satisfied his or her performances merit a rating of 80 or above.

Diore Lia attracted plenty of attention ahead of her intended appearance in the Epsom Derby. The daughter of Yeats was a 500-1 shot for the premier Classic, but was free to run, although the BHA prevented apprentice Gina Mangan from taking the ride. Diore Lia was eventually ruled out of the race due to injury.

“Thanks to the PJA (Professional Jockeys Association) putting it back on the agenda, a further proposal was already being considered by the Flat Pattern Committee before the issues surrounding this year’s Derby put into clear focus the need for action to be taken.

“Introducing a minimum rating for these races has three clear benefits.

“Firstly, it will help protect the welfare of the human and equine participants in our major races by reducing the risk that comes with inferior horses competing against far superior opponents.

“Secondly, it will ensure that the risk of unsatisfactory results in these races is reduced by taking out the unknown factor and complications that can be caused in-running by an inferior horse.

“Finally, it will help preserve the reputation and public perception of our top races as crown-jewel events, ensuring the focus can remain on these races identifying and celebrating our sport’s champions.”