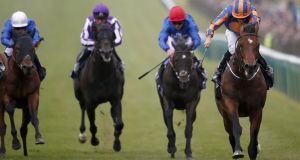 Aidan O’Brien feels that it is now or never to try Churchill over 10 furlongs in next week’s Juddmonte International at York.

After side-stepping an outing with the son of Galileo in the Sussex Stakes at Goodwood on account of the soft ground the Ballydoyle handler will now step the English and Irish 2000 Guineas winner up to a mile and a quarter.

Should Churchill take his chances on the Knavesmire it will see him renew his rivalries with Barney Roy, whom he finished fourth behind in the St James’s Palace Stakes at Royal Ascot on his most recent start.

Irish Derby winner Capri could bid to bolster his position at the the head of the market for the William Hill St Leger with an outing in the Betway Great Voltigeur.

O’Brien added: “Capri is in it and Venice Beach is in it. That type of horse they are all there. The horse that won at Leopardstown the other night (Spanish Steps) is in it. So we have three or four possibles for that.”

Plans are in place to drop Washington DC back down to the minimum trip on the Knavesmire for a second shot at the Coolmore Nunthorpe Stakes.

The son of Zoffany gained his second win of the season after landing a six furlong Group Three at the Curragh on Sunday.

He added: “That is where he could end up next. A fast pace and following the other horses will suit him. That’s very possible.”

Almanzor makes his long awaited return to action in the Prix Gontaut-Biron Hong Kong Jockey Club at Deauville. Jean-Claude Rouget’s brilliant colt won five of his six starts last season including top-level victories in the French Derby at Chantilly, the Irish Champion Stakes at Leopardstown and the Champion Stakes at Ascot.

His reappearance has been delayed, with Rouget not 100 per cent happy with his charge earlier in the campaign, but he returns at Group Three level on Tuesday.

Almanzor once again holds entries in the Irish Champion and the Champion Stakes, but connections are keen not to look too far ahead. “We don’t want to make plans until after he runs,” Vidal added.

Dual Classic hero Brametot is the star attraction in the Prix Guillaume d’Ornano at Deauville . Jean-Claude Rouget’s colt claimed narrow victories in both the French 2000 Guineas and the French Derby and returns from a two-month break for this 10-furlong Group Two.

Sylvain Vidal, racing manager for the latter, said: “He is a very good horse and Jean-Claude is very happy with him. We’ll make plans after tomorrow, but I know Jean-Claude is thinking of sending him straight for the Arc.

“We’ll have to see how he runs and Al Shaqab own 55 per cent of the horse, so they will also be a big part of making the decision.”