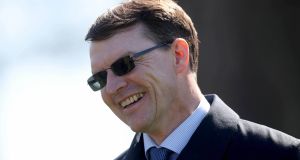 Aidan O’Brien: saw Clemmie claim wins in both the Grangecon Stud Stakes at the Curragh and the Duchess of Cambridge Stakes at Newmarket. Photograph: Donall Farmer/Inpho

Ken Condon is looking forward to seeing classy juvenile Mamba Noire test her powers over seven furlongs in the Sweet Solera Stakes at Newmarket on Saturday.

The Cork maiden winner finished a long way down the field in the five-furlong Queen Mary Stakes at Royal Ascot in June, but has since bounced back with two fine efforts over six furlongs.

She was third behind the Aidan O’Brien-trained Clemmie in both the Grangecon Stud Stakes at the Curragh and the Duchess of Cambridge Stakes at Newmarket.

Splitting the pair in second at Newmarket was Mark Johnston’s Nyaleti, who gave the form a huge boost when she bolted up in the Princess Margaret Stakes at Ascot late last month.

Condon said: “Our filly will be stepping up to seven furlongs on Saturday, but the way she’s finished her last two races is very encouraging. If there’s a bit of ease in the ground I think that would suit her.

“The ground was just too quick for her in Ascot, but she did well physically after that to come out fairly quickly and ran a good race behind Clemmie at the Curragh. We felt it was an improved performance again at Newmarket and obviously the form looks very good.

“Nyaleti has obviously come out and won very well and I know the boys at Ballydoyle hold Clemmie in very high regard. She looks a Classic filly in the making.

“She’s come home well in her last two races, so we’ll see how she gets on over seven furlongs.”

The Lope De Vega filly backed up a debut triumph at Chelmsford with a facile success in a novice event on her first start on turf at Newmarket last month.

Botti said: “She seems well and we’ve been happy with her since Newmarket. This is a step up in class, obviously, but she was quite impressive the other day and after two runs and two wins she’s entitled to take her chance.

“I don’t think she’s ground dependent, but being by Lope De Vega, she probably handles cut in the ground better than others. I’m looking forward to running her and finding out how good she is.”

Richard Fahey’s Dance Diva lost her unbeaten record to Nyaleti at Ascot but the step up in trip is expected to suit.

“Dance Diva was still a little bit green at Ascot,” said Chris Richardson, of owners Cheveley Park Stud. “She didn’t want to come under the arch and was a little bit edgy and on her toes in the parade ring beforehand.

“She’s obviously a good filly and a very good filly beat her on the day. We think the penny is dropping with her and the way she finished at Ascot would suggest stepping up to seven furlongs will suit.”

Cheveley Park are also represented by John Gosden’s Juliet Capulet, who won at Thirsk last month on her fourth visit to the racecourse.

Richardson said: “Juliet Capulet is a progressive filly and John is very sweet on her. We bought her to run in races like this and it will be interesting to see how she performs.”

Hugo Palmer’s Jousi stepped up from her debut fourth behind Poetic Charm, whom she meets again, to win at Ascot.

“We think quite highly of her and I think she’ll outrun her price,” said Tony Nerses, racing manager to owners Saleh Al Homaizi and Imad Al Sagar.

“She’s bred very nicely, by Dubawi out of a Galileo mare who was a Listed winner, so she’ll go on the ground. She might surprise a few.”

Liverpool come unstuck as Atalanta get their revenge at Anfield 22:17
Tyrone announce Brian Dooher and Feargal Lohan as joint managers 22:07
Keith Duggan: Through the glories and the disgraces, we were all Maradona addicts 20:30
Manchester City cruise into last 16 with win in Greece 20:29
Rapid Vienna v Dundalk preview 20:27