Joseph O’Brien can herald a change of the Galway guard 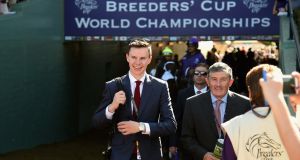 It remains Irish racing’s most singular event but there will be an undoubted changing-of-the-guard element to Galway’s 2017 festival should Joseph O’Brien emerge as the week’s top trainer.

Aidan O’Brien’s 24-year-old son has officially held a licence for only just over a year but has been backed into 9-4 second favourite to lift the Leading Trainer award.

A year ago Willie Mullins pulled off what once would have seemed near-impossible and dethroned the traditional “King of Ballybrit”, Dermot Weld. Jump racing’s maestro is odds-on to retain the title.

But with Weld dismissing his chances of resuming Galway dominance on the back of a virus-hit campaign, it is O’Brien who is widely anticipated to emerge as Mullins’s main danger.

It makes for a different sort of festival speculation about how most of this week’s record €2 million prizemoney pot is likely to wind up being divided out.

Off the track there will be change too with conspicuous new security arrangements and restrictions in place as crowds of more than 140,000 people are expected to pour through over the next seven days.

If that’s a sign of how even one of Irish sport’s most eagerly awaited highlights is not immune from dispiriting wider realities, it won’t stop the traditional focus on a betting ring which is expected to turn over about €8 million during the week. Another €5 million could be bet on-course on the tote.

Racing’s sands are rarely unshifting however, something highlighted again on Friday with Michael O’Leary’s decision to fire Bryan Cooper as his retained rider. The Ryanair boss’s Gigginstown colours will be absent from Monday evening’s card but Cooper has two rides, including one for Weld in the opening novice hurdle.

That’s the race which sees the former champion Barry Geraghty return to action after breaking his arm in the Irish National on Easter Monday.

There’s a neat symmetry to how his first mount back, Le Richebourg, is horse No 1 for the first race on the first day of the festival. It could also be a sign of the week to come that it is O’Brien’s name at the top.

It’s 22 years since Aidan O’Brien won the Galway Plate with Life Of A Lord. A year later the same horse won the big chase again. In 1997 Toast The Spreece landed the Galway Hurdle under Tony McCoy.

Two decades later and O’Brien’s son is preparing one of the 7-1 joint-favourites for Thursday’s €300,000 Guinness Hurdle in Tigris River while Slowmotion is set to run in Wednesday’s Tote Plate.

With Ballydoyle’s focus on this week’s Group One action in Goodwood, it is O’Brien jnr who is readying one of the most in-form teams in the country for a week where he will be represented across the board.

O’Brien saddles five runners on Monday. They compete for the novice hurdle and the following handicap hurdle. Medal Of Honour has an outstanding chance in the two year old maiden. Eagle Spirit is top of a flat handicap and Chess Grand Master  has a big bumper shout.

Weld and Mullins saddle five each too and have two and three runners respectively in the featured €100,000 handicap for amateur rides.

But if one man’s focus is mostly on the flat, and the other’s over jumps, their young rival has cards to play across the codes, as has been proven emphatically in recent weeks. The run has brought O’Brien’s jumps tally this season to 26 winners. He has had 24 on the flat.

“The horses have been running well all summer and long may it continue,” O’Brien said on Sunday. “Galway isn’t something we’re made a priority of but everyone loves a winner there.”

He rode many during a short but brilliantly successful riding career and enjoyed Galway’s tight and undulating circuit with the final hill always containing the potential to alter the face of a race late on.

“I rode a few winners there as an apprentice and so I’ve always like Galway. I know some of the lads don’t like riding it much but it was always lucky for me,” O’Brien said.

His victories included the juvenile maiden twice on Robin Hood (2010) and Jamaica (2014.) This time he will saddle Medal of Honour for the race.

The colt has his fifth career start, again under the trainer’s younger brother, Donnacha, who had a Curragh hat-trick on Saturday. Last time out the horse was runner up to next year’s Derby favourite, The Pentagon.

“Experience is a good bonus for him. He’s been unlucky in bumping into some above average ones. You’d think in normal circumstances he’d have won a maiden by now,” the trainer said.

This is the juvenile race Weld farmed like no other over the years, winning it 24 times. This time the former “King of Ballybrit” doesn’t have a runner which is a big change in itself. It hardly hurts Medal of Honour’s chance either. O’Brien joked: “That will be a help!”