Bryan Cooper, who is no longer Gigginstown’s No1 jockey, only managed fourth place 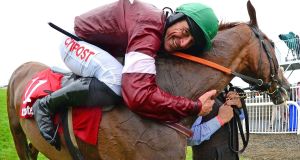 Maybe the regularity of O’Leary’s Gigginstown Stud colours in the Plate winners enclosure – or that Balko Des Flos travelled supremely throughout the race – contributed to relatively genteel reception for the 6-1 winner compared to some raucous festival scenes of the past.

O’Leary was absent from Ballybrit “on Ryanair duty” but, only five days after he fired Bryan Cooper as his No1 jockey, the vocal restraint seemed apt.

After all it was Russell who got his ‘P45’ as Gigginstown’s retained rider on New Years Eve of 2013 when O’Leary famously invited him for a cup of tea.

And the Cork man’s low-key response to that blow has been pointed to as the example for his replacement to now follow: what not said being at least as significant as what is.

Cooper wore Gigginstown’s first colours in the Plate but had to settle for fourth on A Toi Phil in a race in which his former mount travelled like a winner throughout. The gambled on 3-1 favourite Shaneshill blundered at the second last and ultimately came up almost five lengths short.

It was a second Plate for trainer Henry De Bromhead but considering he inherited Balko De Flos when O’Leary removed his 60 horses from Willie Mullins last September, there was little doubt the day’s dominant personality was elsewhere.

O’Leary’s brother, Eddie, was keen however on clarifying the wording of Cooper’s new position.

Since Balko Des Flos appeared beforehand to stand out as a standout contender among half dozen Gigginstown runners, and Russell was once as out of favour too, Cooper can console himself with racing’s fashions being fickle but sometimes retrievable.

It was an especially satisfying moment for Russell who will try to win a third Galway Hurdle on Thursday on Thomas Edison but who was breaking his Plate duck.

“I needed this one,” admitted the former champion jockey whose Cheltenham Gold Cup win on Lord Windermere just ten weeks after losing the O’Leary job tops a sparkling big-race CV. “But there’s a couple of more to get yet, and a few I’d like to win twice!”

Russell added: “His jumping was very economical. He got there easy enough and winged the last two. I thought I’d got there way too soon but you can’t give away an advantage like that.”

De Bromhead praised Russell’s ride and admitted through the race he thought: “Bar a fall or something nasty we have a right chance. A couple went in front of us but it wasn’t a bother and it went our way today.”

It was when pressed on future plans for the winner that De Bromhead diplomatically postponed any decision until after a consultation with O’Leary Bros.

But an insight into the nature of such owner-trainer diplomacy emerged after he was quizzed about when he originally pencilled in the Plate as a target for Balko Des Flos – “Probably when Eddie O’Leary mentioned it to me after he ran at Punchestown!”

Willie Mullins had to settle for second in the Plate but he took his tally for the week to five with a double through Minella Beau and Exchange Rate, both in the colours of local owner, Annette Mee.

Exchange Rate followed up a bumper success by landing the amateur maiden under Patrick Mullins who said: “He has a real flat pedigree so we weren’t worried about coming back to a mile and half. He’s won in Galway now for the Mees and that’s their Cheltenham.”

In contrast Dermot Weld has still to hit the mark this week although So You Thought came close, beaten only half a length by Jet Streaming in a handicap.

Despite the stable form, the Weld newcomer Sansibara Jewel was backed into 4-6 favourite for a maiden but managed only fifth behind Perfect Soldier.

The 14-1 winner was too strong for the topweight Clara Sorrento while Miss Eyecatcher made most of the running to hold off the well backed favourite Rosie Alice in the mares hurdle.